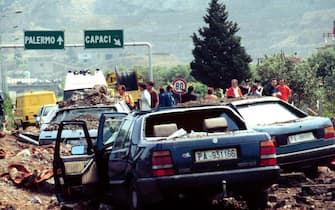 May 23, 2022 marks the thirtieth anniversary of the massacre of Capaci as a result of which the judge lost their life Giovanni Falcone, his wife Francesca Morvillo and three escort agents. In July, there will also be the thirtieth anniversary of the via D’Amelio massacre in which the friend and colleague of the magistrate, Paolo Borsellino, was killed

WATCH THE VIDEO: Attack on the State, Maria Falcone: I learned of the massacre from TV

Falcone and Borsellino are still the symbol of the fight against the mafia, and their life and theirs sacrifice they have been an example for many. Over the years, there are those who have tried to tell them on the small and large screen

“Attacco allo Stato”, a special on Sky TG24 30 years after the death of Falcone and Borsellino

The first film on the magistrate killed in Capaci was released the year after his death, directed by Giuseppe Ferrara, with the title Giovanni Falcone. For the role of Falcone he was chosen Michele Placido (pictured in a scene from the film) while Giancarlo Giannini took on the role of his colleague. The cast also included Massimo Bonetti, Anna Bonaiuto and Gianni Musy

Giovanni Falcone, the story of the judge killed by the mafia in Capaci

Paolo Borsellino it is instead a work of Gianluca Maria Tavarelli. Defined by some as a film and by others as a television miniseries, it was broadcast in November 2004. Here Falcone is played by Ennio Fantastichini while Giorgio Tirabassi (in the photo) plays the role of Borsellino

The singer-songwriter Fabrizio Moro stated that it was after seeing this film that he wrote Thinks, the song with which he won the 2007 Sanremo Festival in the Youth section

Marco Turco instead directed In another country, a documentary from the early 2000s that examines the relationship between the Sicilian mafia and the Italian state in the years of the First Republic. The film traces the life and work of magistrates also through testimonials And stock images

Falcone’s life is also told in Giovanni Falcone, the man who challenged the Cosa Nostraa two-part miniseries directed by Andrea Frazzi and Antonio Frazzi and broadcast in 2006. Inspired by the book History of Giovanni Falconesees Massimo Dapporto in the role of the magistrate and has music by Ennio Morricone

Paolo Borsellino – The 57 days it first aired in 2012. Directed by Alberto Negrin, the film tells i 57 days that separated the murder of Falcone from that of Borsellino, which took place on July 19. The latter is played by Luca Zingaretti while no one plays the role of his colleague because the film begins to tell the events starting from 23 May 1992.

One of the more recent films about the two magistrates is It was summer. Directed by Fiorella Infascelli, with Beppe Fiorello in the role of Borsellino and Massimo Popolizio in those of Falcone, the film is set in thesummer of 1985, when the two judges were urgently transferred to Asinara together with their families following a more alarming threat than usual

The film, which was nominated for a David di Donatello, stands out from the others because it highlights one more private dimension of the two magistrates, who at that time were working on the maxiprocess

In addition to the films focused on the figure of Falcone and Borsellino, in recent years others have come out that have tried to tell the story of their buffer stock and of other people with whom they have had to do during their life (in the photo, the agent Vito Schifani)

Massacre of Capaci, all the victims of the attack

In 2003, for example, it came out The angels of Borsellino. Directed by Rocco Cesareo, the film also focuses on the figure of Emanuela Loi, the only woman who was part of the magistrate’s escort. Brigitta Boccoli plays her (in the photo)

I forgive you but kneel it is instead the film that reconstructs the lives of the agents who died in the Capaci massacre. Released in 2012 and broadcast on television, it is freely based on the book written by Felice Cavallaro e Rosaria Schifaniwidow of one of the killed agents, who spoke the words that inspired the title

Giovanni Falcone is also spoken of The traitor, the film of Marco Bellocchio centered on the figure of Tommaso Buscetta, played by Pierfrancesco Favino. In the film, the magistrate is played by Fausto Russo Alesi

Falcone is instead played by Claudio Spadaro in the series 1992created by Alessandro Fabbri, Ludovica Rampoldi and Stefano Sardo from an idea by Stefano Accorsi and broadcast on Sky Atlantic