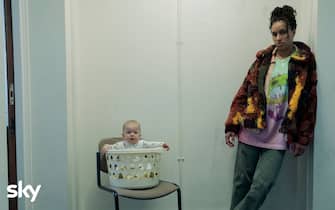 Starting this evening, Friday 17 June, in the late evening on Sky Atlantic The babyBritish horror-comedy series co-produced by Sky and HBO

The baby tells the story of Natasha, 38, the only one in her group of friends who doesn’t have children, also because she can’t stand them. But one day, suddenly, she finds herself having to manage a newborn on her own. Her baby changes her life, also because she is a manipulator with strange powers

Natasha tries to get rid of the baby, but the feat seems impossible. When the little one is in danger of life, the woman is forced to find a solution, and in the meantime she finds her sister Bobbi and collaborates with the mysterious Mrs. Eaves who seems to have an inexplicable interest in the child.

The Staircase – A suspicious death, the trailer for the tv series on Sky

To play the role of the protagonist is Michelle De Swarte

A timeless love – The Time Traveler’s Wife, the series on Sky. The trailer

The child is played by the twins Albie and Arthur Hills

Rounding out the list of actors Isy Suttie as Rita, Seyan Sarvan as Nour and Sophie Reid as Lydia