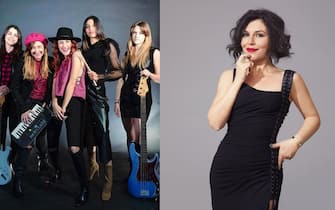 The Cherry Bombs I am a young band from Milan, who performed in the first episode of the new talent The Band (aired every Friday on Rai Uno) with the song Ithe raging sea at sunset of sugar. Giusy Ferreriwhich we also saw in the last Sanremo with Honeywill be their tutor

WATCH THE VIDEO: The Band, the new talent show by Carlo Conti

The group JF Band met at school and introduces a female frontman. The interpretation of Rolling in The Deep of Adele convinced Federico Zampaglionefrontman of the Tiromancinoto bet on them

The Marche group N’Ice Cream sings together since 2013, but The Band it can certainly represent an important springboard. In 2015 they released an album called Spoiled them which has sold over 1,000 copies. Their tutor will be Irene Grandi

All-female band originally from Udine, le Living dolls have rock as their strong point. In this regard, their tutor could not fail to be someone like Francesco Sarcina, leader de The Vibrations

The group Achtung Babies named after U2’s seventh album Achtung Baby e they made themselves known precisely for having often interpreted covers of the Bono Vox band. Their tutor will be Rocco Tanica

Originally from Tortona (Alessandria), the Anxia Lytics they are the youngest in competition with an average of 20 years. They have conquered Sweet blackwhich will follow them during the episodes, with the interpretation of Little by little by Riccardo Cocciante

THE Mons they boast several live performances in Turin (they are from Grugliasco) and already have an album released in 2019, entitled It can not rain forever. Their tutor will be Marco Masini

For the Roman band Isoladellerose this is not an absolute debut on TV because they were among the protagonists of Intercom Rai 2 alongside Paola Perego and Simona Ventura. They will be followed by Enrico Nigiotti