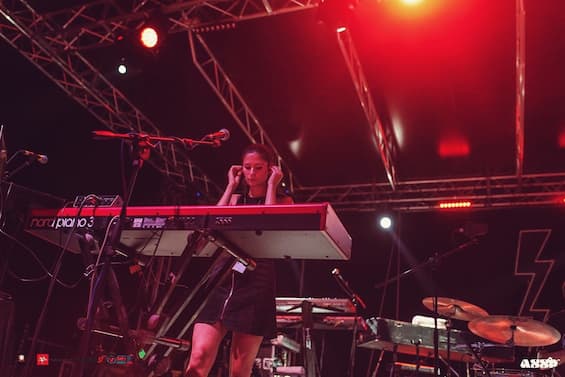 It doesn’t happen often, but goodbye it happens every now and then, that you listen to an album and remain dazed. So it happened to me with Lighters and Loversthe new work of The Bankrobberthe brothers’ artistic project Giacomo And Maddalena Oberti. There are, in the eleven kaleidscopic tracks, the seductive alternation of female and male voices, the aggressiveness of synths and keyboards, guitars that seem one more voice … it’s Lighters and Lovers a profoundly international album that jealously preserves its Italian roots, which develop in Riva del Garda. I asked to Magdalene to accompany me in the world of The Bankrobber and in his.

Maddalena let’s start from the history of The Bankrobber and your passion for music.

Maybe this was a real job, it’s a big word. When I was ten I started playing the piano and my brother, six years older, was studying guitar at the music school: it happened that I fell in love with a girl who played the piano and consequently I fell in love with the instrument. I started attending the Conservatory after a year of private lessons. Of course it’s a very different environment than the band’s. Today I teach classical piano. I was born in a family with a drummer father and at the age of eight they gave me an mp3 player where songs were loaded that, in elementary school season, I listened to at home, absorbed by realities such as Verve and Gorillaz. Then, in my teens, I deepened my knowledge of music and discovered other bands.
Why bank robbers?

I joined the group at a later time and the name was already that. It is inspired by the Clash song.
Your path is very live. And you do many things abroad: in what does Italy disappoint you, artistically speaking?

This summer we did some dates in Italy, in Volterra, for example, we opened the Fulminacci live. It is just a different culture like in cinema and in dress. In France and Germany there is no mainstream, unknown bands play and it’s cool to go there even if they are of another nationality and buy the t-shirt and vinyl. In Italy, interests are often restricted.
The video of Leash Died (Shouldn’t Cry). How did you think about it?

A little acid given the electronic sounds, I created a slightly upside-down atmosphere that I expressed with the camera movements; static sequences also have crooked angles.
White Skin I perceive it as a song about absence very much a daughter of this era where even if everyone is watching you on the dance floor we are basically alone. Is that so?

It is a text written by my brother Giacomo, I thought of the video. Music is interpreted, everyone reads to us what he wants. For the video of White Skin I would like to thank Nicola Cattani, Camilla Pozza, Daniele Magoni, Mattia Ottaviani, Tobia Cattoni, Marco Carner and Dario Marconcini.
Somebody killed my name… at the end you sing I could have been undone I could have been somebody: how important is it today to be an identity?

I’ve always had the paranoia of having a distinctive signature. It comes naturally. It is important for a speech of uniqueness. We don’t want to have invented something new but to write real things. And the idea of ​​being an identity is a source of pride for us.
In my opinion, one of the recurring themes of the album is time: how do you live with it? Is it always too little, always too much?

It hides insecurities, the mystery, the past and the future, not negative but very personal and unknown feelings.
From the pandemic onwards, music has returned to being a bearer of hope: do you think it can help change the world or could it be an illusion like in the 1960s?

It can be and I have the feeling that we are always progressing but unfortunately we are used to taking one step forward and two steps back a little in all things. Music can’t do it alone, you need synergies. Let’s say that it can contribute by collaborating with the visual arts, cinema and literature.
Ten years ago with Señorita perhaps there was the turning point: what remains of those bankrobbers?

It was an important experience but not the turning point. The project was different even if the name remained. Those albums are no longer on the platforms.
I Know what I want beacuse I’m always wrong: is this the magic formula of the Bankrobbers?

It is one of my favorite songs during live performances even if I liked listening to it less; it has a drum with a crazy loop and can get dirty with rougher arrangements. It will be the next video. Yes, we are rekindled in that verse.
Outside of her artistic role, who is Maddalena?

My passion is making videos, I like to collaborate to create a concept, a video. I attended the artistic high school with a multimedia address that transmitted this passion to me. I am also passionate about photography.
What will happen in the coming weeks?

We will have concerts in late November in France and Spain. For now in Italy we have no dates.