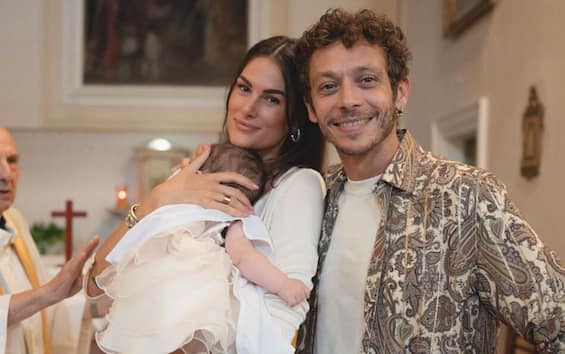 Saturday 10th September Valentino Rossi And Francesca Sofia Novello they baptized their first daughter, Juliet, as evidenced by several shots published on social media. He was also present at the ceremony Cesare Cremoninigreat friend of the couple.

The baptism of Juliet

Valentino Rossi and Francesca Sofia Novello baptized the baby Juliet, the daughter born on March 4th. First the ceremony in the church, then the party with relatives and friends at the Castello di Granarola, in the Marche region. As documented by the posts published by the model, the day was marked by tenderness, with balloons and teddy bears to decorate some parts of the location. The set-up was curated by the event organizer Giorgia Farina, who created arches of white and antique pink balloons at the entrance to the Castle. Outside there was an area for refreshments, with a table of sweets, pastries, drinks and the three-story cake decorated with some teddy bears. A country chic party, with towels lying on the ground and cushions with decorated bears on which the word “Juliet” dominated. A special day, which the two parents spent together with their closest relatives and friends. The pilot was also present among the well-known faces Luca Marini (the godfather) e Cesare Cremonini, who for the occasion enjoyed singing and above all “making some small guests sing”. Mum Francesca Sofia Novello chose a cream long dress with side slit for the event, while dad Valentino Rossi preferred a more informal outfit: brown trousers, white T-shirt and open patterned shirt.

At the moment there is still no talk of marriage between Valentino Rossi and Francesca Sofia Novello. “Everyone asks me when we get married. I don’t know what to answer ”the model had declared in 2021, in the Verissimo studios. “The gossip would have spoken even without a ring! It is just a ring, which can have a million meanings. In fact, it’s a simple gift, it has nothing to do with marriage ”she explained, justifying the presence of a precious ring. The couple, who have been together for four years, are therefore not planning to get married at the moment. “There is no wedding in sight that I know of! It is definitely an important story as well I think he’s the man of my life – the 28-year-old model continued to tell – But I don’t see marriage as a sine qua non. If it happens well, otherwise we love each other the same, you don’t need a wedding ring “.