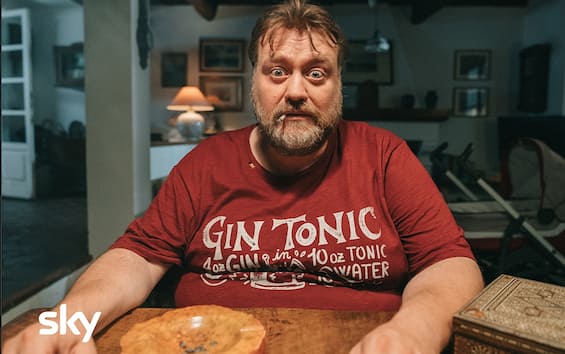 Last date with THE CRIMES OF THE GLIMMER (The Special): the Sky Original production co-produced with Palomarthe episode AND THEN ZUMBA! he arrives exclusively on Monday 23 January at 21.15 on Sky Cinema Uno and Sky Cinema 4K (and at 21.45 also on Sky Cinema Comedy), streaming only on NOW it’s available on demand, even in 4K quality.

THE CRIMES OF THE GLIMMER it has come this year in the tenth season and for the occasion they are proposed well three new stories. Directed by confirmed Roan Johnson (who is also a creative producer of the stories), this year joined by Milena Cocozzawho directs this episode, as well as the historical characters who made the “BarLume” famous: Philip Timi still plays the role of Massimo Viviani, Lucia Mascino those of Commissioner Fusco, Enrico Guidi it’s the Tizi, the “old men” Alexander Welcome (emo), Marcellus Marziali (Gino), Atos Davini (Pylades), Massimo Paganelli (Aldo), Conrad Guzzanti is Paolo Pasquali, an insurer of Venetian origins, e Stephen Fresi is Beppe Battaglia, Massimo’s half-brother. Even the new chapters are freely inspired by the world of the series “The crimes of the BarLume” by Marco Malvaldi, published in Italy by Sellerio Editore.

In the new story, THEN ZUMBA!, also enriched by a cameo by the singer-songwriter Francis Motta, the murder of Pineta’s pediatrician throws a hyper-anxious father like Beppe into panic. Especially since Fusco, distracted by her love pains, seems to be uninterested in the case. Meanwhile at the BarLume, the old men and Massimo have to deal with the new mayor Pasquali, who launches a very complicated separate waste collection, while Tassone is desperately looking for a way to resign as Minister of the Interior.