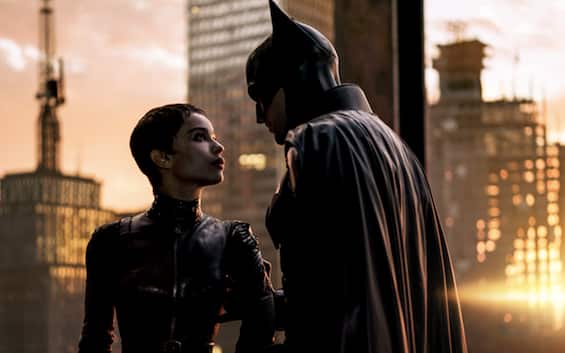 “Fear is a tool”. H. P Lovecraft, who considered it the deepest and most ancient sentiment of the human soul, knew this well. And The Batman, the protagonist of the 2022 film co-produced, co-written and directed by Matt Reeves, knows it too. Arrived in cinemas on March 3, and visible from today April 19 on Sky Primafila Premiere, it is an autonomous project, without any connection with the DC Extended Universe. Thus, a work that cuts ties with previous 11 film adaptations of the comic created by Bob Kane and Bill Fender in May 1939. The film starring Robert Pattinson rewrites the story of Gotham City’s masked vigilante with all the colors of black. The bat man is transfigured into the bishop of vengeance, however as Shakespeare wrote: “Revenge is more deaf than a snake to the voice of a just decision”.

The Batman, Cinecomic is tinged with Noir

More than a cinecomic, The Batman it’s a noir. Of the cinematic genre in vogue in the United States during the Second World War, the film has all the stylistic features: the voiceover, the subjective, the femme fatale, the use of photographs, the flashback, the detective, the gangster, the metropolis , violence, sadism, eccentric bodies. Except that in this film, Bruce Wayne’s alter ego is neither Philip Marlowe nor Sam Spade. And he’s not even the hero Gotham deserves or what he needs. This time around Batman is a tormented and lonely avenger. A frail twilight knight haunted by the death of his parents. At the helm of the iconic Batmobile, a vulnerable executioner convinced that he is no longer able to make a difference in a city that devours itself. Because scars can kill you even when wounds have healed.

The Batman, a long Halloween of death and revenge

The Batman starts on Halloween night and ends on November 6th. A week in hell. On the notes of Schubert’s Ave Maria, we witness the ferocious murder of the mayor of Gotham City. And in a Rossinian crescendo, other prestigious personalities from a city beaten by incessant rain die like pawns on a chessboard. But water doesn’t clean up the streets, as Travis Bickle wished in Taxi Driver, the masterpiece signed by Martin Scorsese. From the Iceberg Lounge to the Arkham State Ospital, evil eats the soul of the protagonists of this dark detective story. It’s not enough for the Batman to beat up a few gangs of thugs on the subway. Wisdom does not run in the blood when the sins of the fathers fall on the children.

The soundtrack of The Batmancurated by Oscar winner Michael Giacchino ranges from To fly sung by Dean Martin a Something in the Way of Nirvana. And the Batman played by Robert Pattinson has several affinities with Kurt Cobain. A grieving superhero addicted to the desire for revenge. Even when he wears the role of billionaire Bruce Wayne, Batman is inelegant, neglected, with the dull gaze of one who has fought against his own demons and lost. Not surprisingly, sometimes, when he comes into action he sports a hooded sweatshirt and a black bomber and not all super-equipped. A supere, not very physical with many spots and many fears. Even the relationship with the mentor and limping butler Alfred (Andy Serkis) is complicated by the many emotional knots never untied by the executioner. And the challenge for the Dark Knight will be precisely to transform his weakness into strength.

The Riddler by Paul Dano, an unforgettable villain

There were eons that didn’t show up in a Cinecomic, regardless of whether it was DC or Marvel, a villain as terrifying as it was human. Forget the improbable green onesie shown by Jim Carrey in Batman Foreverbut also the very chic suits worn by Chris Michael in the series Gotham. The Riddler, that is, the Riddler played by a titanic Paul Dano, seems the brother of John Doe of Sevenrelated to John Kramer’s Saw-The Riddler. A serial killer with a disturbing look that reinterprets the invisible man of 1933 in a contemporary key. We know: to be means to be perceived. And this is the obsessive drive of the main antagonist of The Batman. A talented psychotic who has finally managed to solve the riddle of his own existence. A criminal with very limited social attitudes, aware that justice can be, blind or poetic, but hardly ever just. Unmasking the truth, this is the ultimate goal of the “monster” next door, exasperated by a system in which the truth does not exist and the lie prevails. To the cry of Non More lies, Edward Nashton (this is his real name) is a sort of distorted and dissociated alter-ego of Batman. An orphan swollen with rage, aware that every renovation project turns out to be yet another lie. A bilious avenger who, in the end, longs to kill even his own idols, as evidenced by one of the many riddles proposed by the film: “What is he black, and blue, and is he already dead? You know it? “

From Zoe Kravitz as Catwoman to Colin Farrell “Penguin”, the cast of The Batman

After Julie Newmar, Michelle Pfeiffer, Halle Berry, Hanne Hathaway and Carmen Renee Bicondova, it was no health walk to embody Catwoman, born Selina Kyle, and scratch the silver screen with style and success, And Zoe Kravitz succeeded in this mission apparently impossible. Net of the character’s bisexuality, the cat really turns out to have nine lives in The Batman. From the height of her fetish boots and her multicolored wigs, an energetic, strong-willed, sensitive girl who has a penchant for strays and theft and who knows how to move in a world overwhelmed by a toxic masculinity. She works perfectly, so does Colin Farrell’s Oswald Cobblepot / Penguin. Disfigured by prosthetic make-up, the American star is inspired by the Fredo of the Godfather. A fat and scarred mafia, extremely penalized, by his physical appearance and eager for redemption, a desire shared by almost all the characters told in The Batman. An applause also John Turturro who in the role of the boss Carmine Falcone, offers us a portrait of a very mammasantissima, lonely, reserved, almost modest but capable of strangling you while smiling at you. He has little to laugh about instead, the first black James Gordon, played by Jeffrey Wright. An honest and intrepid guardian of the order, a Serpico who has in Batman, the only ally.

Barry Keogham, The Batman and Joker

“The Body is the prison of the soul”, said Plato. So, in one of the final and most cryptic and fascinating scenes of The Batmanset in the iconic city asylum, we discover that in this film “everyone is crazy”, to quote the back cover of the sublime and perturbing graphic novel Arkham Asylum signed by Grant Morrison and Dave McKean. Behind bars, the enigmatic Riddler will understand how true it is that whoever finds a friend, finds a treasure. Often, a grin is worth a thousand words. After all, crime in Gotham, maybe late, but it pays off. So that shadow could really be the sinful clown prince. On the other hand, as the late Heath Ledger said in The Dark Knight: “I am the dog that chases cars, I wouldn’t know what to do if I caught them. I just act.”. For the influential Internet Movie Data Base, Barry Keogham simply plays “Unseen Arkham Prisoner” in Matt Reeves’ film. A very prosaic definition, but it is known that the Bat Man hangs out more willingly than poets, especially if they are cursed. So if “I is another” (Rimbaud’s word) maybe the Joker lives here. Perhaps, soon, a laugh will bury us, because it is dangerous to joke with a smile. The Killing Joke sign.

The Batman, a journey at the end of the night

The Batman by Matt Reeves represents a fundamental turning point in the world of cinecomics. In the wake of the Joker starring Joaquin Phoenix, the film as dark as night, stands out in the starless sky of a Gotham addicted to “Drop”. A metropolis suspended between Sodom and Gomorrah, a naked city, enveloped by the photography of Greig Fraiser (Oscar nominee for Dune) which is the backdrop to a conflict in which the boundaries between good and evil are truly blurred. In short, The Tra a tribute between a tribute to the American realism of Edward Hopper’s paintings and a tribute to the sick and cruel atmospheres of Francis Baconm B’s paintingatman it is truly the overwhelming epic of a crusader who will perhaps never find the Grail, lost in the deepest darkness.

The film is also part of the SKY CINEMA BATMAN channel programming (channel 303) which, on the occasion of the awaited premiere THE BATMAN from Monday 14 November to Sunday 20 November will propose a collection of films dedicated to the hero of Gotham City. Beyond THE BATMAN among the other films in the collection there are also the two films directed by Tim Burton, BATMAN, winner of the Academy Award® for Best Production Design in 1990, which sees Michael Keaton as Bruce Wayne, as well as the Batman cloak, alongside Kim Basinger as Vicki Vale and Jack Nicholson as the colorful Joker; And BATMAN – THE RETURN (1992), in which the hero of DC Comics – also with the face of Burton – deals with Michelle Pfeiffer’s gorgeous Catwoman and Danny DeVito’s terrifying Penguin.

And again the two films by Joel Schumacher: BATMAN FOREVER (1995), which stars Val Kilmer as Batman, Nicole Kidman as Doctor Chase Meridian, Jim Carrey as the Riddler, Tommy Lee Jones as Two-Face and Chris O’Donnell as Robin; And BATMAN & ROBIN (1997), starring George Clooney as the hero, flanked by Chris O’Donnell’s Robin. As villain instead we find Uma Thurman called to interpret the role of Poison Ivy and Arnold Schwarzenegger that of Mr. Freeze.

There will also be the signed trilogy by Christopher Nolan with BATMAN BEGINSwhere for the first time is Christian Bale to give face and body to the Dark Knight. Beside him there are Michael Caine in the shoes of the trusty Alfred, Gary Oldman in those of the incorruptible police sergeant James Gordon, e Morgan Freeman in those of Lucius Fox who looks after the affairs of Wayne Enterprises, as well as being a scientist and inventor in the service of Bruce Wayne. Also in the cast Liam Neeson who plays Henri Ducard, Katie Holmes giving Rachel Dawes face e Cillian Murphy who plays the role of Jonathan Crane. It’s still THE DARK KNIGHTin which Bale-Wayne must save Gotham from the creepy Joker, played by an unforgettable Heath Ledger who for this role earned the Oscar® and the Golden Globe for Best Supporting Actor. And finally THE DARK KNIGHT – THE RETURNwhere we find a Bale-Wayne forced to return to business when the thief Catwoman, played by Anne Hathawayand the terrorist Bane, played by Tom Hardy.