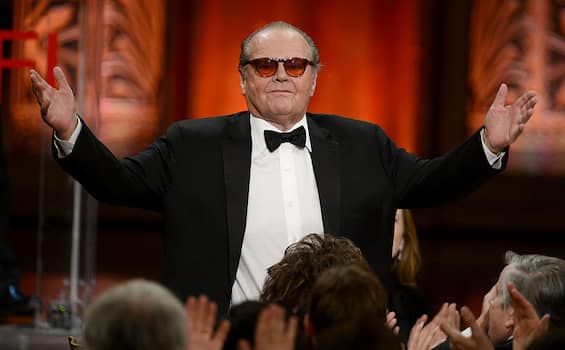 Is there a more or less precise definition that can describe the figure of the legendary Jack Nicholson? Most of the international critics considered him, depending on his films: histrionic, demonic, unconventional, hypnotic, sarcastic, sacred monster, icon of American cinema, the greatest actor of the twentieth century (like Marlon Brando).

Certainly, for all those who have loved his characters madly, the pigeonholing of one of the most independent actors in Hollywood always arouses some perplexity.

For many Jack Nicholson, he will always be George Hanson, the alcoholic attorney of Easy Rider (1969), crazier, despite his white suit, than his two alternative biker friends (Peter Fonda and Denis Hopper) walking around the streets of America. Many others will remember the face of Jack Torrance, the hallucinated protagonist of Shining (1980), a writer with no ideas in a hotel too large and isolated not to drive madness, and that of McMurphy in One flew to the nest of the cuckoo (1975) by Milos Forman where he is a delinquent who for pretending to be crazy is actually locked up in an asylum.

However, everyone will agree that Nicholson (85 years old on April 22) has made the history of cinema, leaving an unmistakable imprint together, yes, with an image of himself that is sometimes not very reassuring, both on the screen and in private life. . Far from the right-thinking, transgressive, direct, incapable of half measures, he has revolutionized, since his beginnings, the way of being an actor in Hollywood, bringing a wind of change, in the environments of American studios.

Here is a list of Jack Nicholson’s best performances

From the 1977 Stephen King novel that most inspired him, Stanley Kubrick drew one of his masterpieces: Shining. The cult movie, shot between 1978 and 1979, tells the story of Jack Nicholson aka Jack Torrance, a writer in crisis who, to find his inspiration, accepts a job as guardian at the Overlook Hotel in the Rocky Mountains. He sets off with his wife Wendy and their seven-year-old son, Danny, not knowing that that journey will change their lives forever. It is considered, with good reason, one of the most terrifying films in the history of cinema, the result of the perfect combination of Kubrick’s visionary magic, Stephen King’s terrifying suspense and the cult interpretation of Nicholson always remembered for his evil grin. Some scenes of this film, the very famous one in which Nicholson takes a hatchet on the bathroom door where Wendy took refuge, have now become legendary.

45 years have passed, yet few films have left such an indelible mark as One flew over the cuckoo’s nest. Milos Forman’s masterpiece is one of three films in the history of cinema (along with It happened one night by Frank Capra e The silence of the lambs by Jonathan Demme) to have won all five major Oscars: Best Picture, Best Director, Best Actress, Best Non-Original Screenplay, and Best Lead Actor (Jack Nicholson). In the film, he plays inmate Randle Patrick McMurphy and patient leader of an Oregon psychiatric hospital, who challenges tough head nurse Ratched to give her comrades new hope. Nicholson is said to have bet on the film, accepting a low salary and a percentage of any proceeds. It was a winning bet, as the film was a huge success, grossing $ 120 million in 1975.

“I am particularly proud of my Joker. He is a piece of pop art.” So he got to tell Nicholson himself about the character of him. And how not to agree with him since, not only he was the first to be violently interpreted over the top, but he gave the script to all those actors who have ventured into the figure of the Joker. From the late Heath Ledger to the last Joaquin Phoenix. But there is not only this. Tim Burton’s Batman, which was released in theaters in June 1989, proved to be an epochal film from other points of view as well. First of all, the extraordinary success at the box office with over 400 million dollars in box office, corresponding at the time to more than one hundred million spectators. Then the fact that he was the first Joker in history to appear in the cinema. Before Nicholson, only the immortal Cesar Romero had created a live-action version of the character in the TV series Batman. And finally the wild interpretation of Jack Nicholson that makes his villain perfect to best represent the hybrid atmosphere of the film, between gothic features of the Gotham City universe and postmodern visions.

It took the great Roman Polaski and the phenomenal Jack Nicholson as investigator Jake “JJ” Gittes to revive the noir genre, a bit tarnished in the mid-seventies. The film, released in 1974, is over time became an icon of American cinema by entering the ranking of the best 100 films in American film history. Alongside Jack Nicholson in the title role, there is also the ethereal, slightly retro beauty of Faye Dunaway. Without forgetting John Huston, monumental in the interpretation of the very bad Noah Cross. A superlative cast that gives life to a story full of dense atmospheres, intertwining, corruption and mysteries as in the best tradition of the forties noir. And above all the magical hand of Polansky who manages to grasp the evil of man everywhere, the ambiguous perversions of him that result in a violence without borders and without reason. Perhaps the same evil he had encountered as a child in Poland and a few years earlier in Beverly Hills where his wife Sharon Tate (eight months pregnant) had been taken from him forever by a sect of assassins led by Charles Manson, instigator of the murders.

It is one of those films that demonstrate the unusual ability of the American cinema industry in making products that play with feelings, involve even the most savvy audience and in the end allow you to be moved without much remorse. The time when it came out was 1983, a time of Reganian optimism: the United States did not want to denounce its ills and the industry looked to the private sector. So he designed this story with a first-rate cast. Shirley Maclaine, Jack Nicholson, Debra Winger. The plot is the story of a troubled relationship between a widow and her thirty-year-old daughter, married with three children and a marital menage full of mutual betrayals. A slightly insane ex astronaut thinks about changing the widow’s life; instead, an implacable illness affecting her daughter thinks everything of drama. Directed with absolute wisdom by James Brooks, Longing for Tenderness scrapped a handful of Oscars (including those of Shirly Maclaine and Jack Nicholson) and forced audiences around the world to rally around their naive emotion. Debra Wingler, the daughter, with this film obtained the investiture as a star, the film spread a great desire for tenderness in a multitude of films to come, while Jack Nicholson, priceless gigione, succeeded in the enterprise of inventing the type of beauty with the belly.

“Something Has Changed” is a romantic film directed in 1997 by James L. Brooks and starring Jack Nicholson and Helen Hunt. Both actors were awarded the Academy Award for Best Leading Actor in their respective category. Empire magazine has included the film in the ranking of the five hundred Greatest Films of All Time, where it occupies the 140th position. The film that re-proposes the Nicholson-Brooks couple of ” Longing for Tenderness ” is the story of Melvin, a caustic writer full of obsessive and manic disorders. A person to be avoided, who seems to enjoy making others feel bad. On his way they come across a gay artist – the kind of person Melvin finds unbearable – and a maid, single mother of a sick child. The two will change his life and make Melvin adorable.