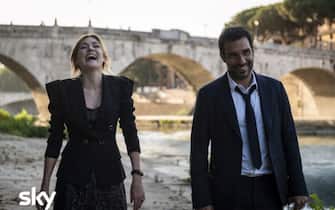 Leave a day in Rome (Sky): from 1 January. Genre: Comedy. Cast: Edoardo Leo, Marta Nieto, Claudia Gerini, Stefano Fredi. Plot: How difficult it is to break up after a long relationship. How to find the right words to say goodbye, trying not to make the other person suffer. One day, perhaps, you might decide to write to a mail of the heart. What if that anonymous letter reached the other half of the couple?

WATCH THE VIDEO: Leave a day in Rome, the trailer for the Sky Original film

The Croods 2 – A New Era (Sky): from 2 January. Genre: Animation. Vocal cast: Alessandro Gassmann, Virginia Raffaele, Benedetta Porcaroli, Francesco Pannofino. Plot: new adventure for the funny prehistoric characters. I’m looking for a place to call home. Upon finding him, they discover that here is a rival clan, the Superior, much more advanced than them. Separated at first, they will have to unite to face an external threat.

The Croods 2: A New Era, the Italian trailer

Me and Angela (Sky): from January 4th. Genre: Comedy. Cast: Pietro Sermonti and Ilenia Pastorelli. Plot: Arturo, 40, receives an unexpected visit from the Angel of Death, who has the appearance of a very attractive and foul-mouthed woman. It shows him that his “perfect” life is a pile of lies and deceptions. Invites him to a quick death. Arturo makes a pact: he will accept his fate if she helps him take revenge on anyone who has wronged him.

Fast & Furious 9 (Sky): from January 5th. Genre: Action. Cast: Vin Diesel, Michelle Rodriguez, Tyrese Gibson, Chris “Ludacris” Bridges, John Cena, Nathalie Emmanuel, Jordana Brewster, Sung Kang. Plot: Dominic Toretto has lived four years of peace with his family. Now he will have to deal with his younger brother Jakob, with whom he has long cut ties. He is a dangerous man, intent on taking over Project Aries, a weapons program that allows you to control every computer in the world.

Dry Air (Sky): from 7 January. Drama. Cast: Toni Servillo, Silvio Orlando. Plot: a dilapidated prison is about to be closed. Twelve inmates and as many prison police officers will have to stay there longer than the others, because the new facility is not yet available. It therefore becomes necessary to manage their relationship in a new way.

Ariaferma, new trailer of the film with Toni Servillo and Silvio Orlando

Dune (Sky): from 8 January. Genre: Science fiction. Cast: Timothée Chalamet, Zendaya, Rebecca Ferguson, Oscar Isaac, Josh Brolin, Jason Momoa, Stellan Skarsgard, Javier Bardem, Dave Bautista. Plot: In a universe dominated by the feudal system, a war between houses breaks out to take control of the spice, a very powerful drug. Betrayed, the Atreides will find themselves on Arrakis having to defend their life. Here the young Paul will be able to fulfill his destiny.

Dune 2, Denis Villeneuve reveals new details on the sequel to the film

Supernova (Sky): from January 9th. Drama. Cast: Colin Firth, Stanley Tucci. Plot: road movie that tells a profound love story. Sam is a pianist and Tucker a writer. They have been companions for many years but that is all about to change. Tucker discovers he has premature dementia. The two decide to take a vacation and collect as many memories as possible before the point of no return.

Supernova, cast and plot of the film with Colin Firth and Stanley Tucci. PHOTO

Redemption Day (Sky): from 11 January. Genre: Action Gary Dourdan, Serinda Swan, Andy Garcia. Plot: Back home after fighting ISIS, Captain Brad Paxton tries to readjust to everyday life, helped by his wife Kate. She accepts a job in Morocco, where she is kidnapped. Brad will have to use all his skills to save her.

The land of children (Sky): from 13 January. Drama. Cast: Leon de la Vallée, Paolo Pierobon, Maria Roveran, Fabrizio Ferracane, Maurizio Donadoni, Valerio Mastandrea, Valeria Golino. Plot: adaptation of the graphic novel of the same name by Gipi. A catastrophe has brought violence and poverty, condemning the survivors to live in isolation. Anyone born into this world has never learned to read and write. The young protagonist intends to discover the contents of his father’s diary, starting a desperate journey.

“The land of children” under the stars of Taormina. The review of the film

Futura (Sky): from 18 January. Drama. Cast: Niels Schneider, Matilde Gioli, Daniela Vega, Aurora Onofri. Plot: Louis is a musical talent but fears he will not be up to par. For this he drives a taxi, to support his family, instead of devoting himself to the trumpet. He is seen accompanying Lucia through the stages of the drug dealing in Milan.

Sleepless nights, kisses for breakfast (Sky): from January 19th. Genre: Comedy. Cast: Ilaria Spada and Alessio Vassallo. Plot: Matteo is an architect but dreams of becoming a cartoonist. He falls in love with Paola, an established writer and cartoonist, thanks to which he finds the courage to change his life. Having lost his state salary and earning little, he will stay at home to manage the girls and the dog, finding the time to unleash his talent. A domestic balance upset by a single encounter.

Sow the wind (Sky): from 20 January. Drama. Cast: Yile Vianello, Feliciana Sibilano, Caterina Valente, Espedito Chionna. Plot: After 3 years of absence, Nica, an agronomy student, returns to her country in Puglia. Here the situation is complex: the family olive groves have been invaded by a parasite, the father is ready for any compromise to bring home money and the mother is on the verge of depression. Only Nica is committed to finding a solution.

Tigers (Sky): from 25 January. Drama. Cast: Erik Enge, Alfred Enoch, Johannes Kuhnke, Liv Mjones, Frida Gustavsson. Plot: Martin is a young football talent. He is 16 years old and finds himself in the Inter Milan Primavera. It is his dream come true but life with his companions and the disorientation given by not knowing the language will make him go into depression.

Here I laugh (Sky): from January 26th. Genre: Biography. Cast: Toni Servillo, Maria Nazionale, Cristiana Dell’Anna, Antonia Truppo, Eduardo Scarpetta. Plot: the life of Eduardo Scarpetta, popular comedian and legend of the twentieth century theater. He lives for the theater and to support his children, legitimate and illegitimate. Everything changes when he decides to “make fun” of D’Annunzio, which will prompt him to set foot in a courtroom.

Here I laugh, cast and characters of the film. PHOTO

Marilyn has black eyes (Sky): from January 31st. Genre: Comedy. Cast: Stefano Accorsi, Miriam Leone. Plot: Diego has frustration containment problems while Clara suffers from mythomania. She tells lies so convincing that she fools herself. They are part of a group undergoing forced rehabilitation. To guide them there is a psychiatrist who tries, with difficulty, to free them from concentration on himself.

Marilyn has black eyes, the cast of the film. PHOTO

4 halves (Netflix): from 5 January also visible on Sky Q and via the app on Now Smart Stick. Genre: Comedy. Cast: Ilenia Pastorelli, Matilde Gioli, Giuseppe Maggio, Matteo Mortari. Plot: Chiara, Matteo, Giulia and Dario are single and with different personalities. They are invited to dinner by two mutual friends who want to challenge the theory of soul mate.

4 Half, released the official trailer of the Netflix movie

Mother / Android (Netflix): from 7 January also visible on Sky Q and via the app on Now Smart Stick. Drama. Cast: Chloe Grace Moretz, Algee Smith, Raul Castillo. Plot: The world has been devastated by a violent revolt of androids. A young woman, pregnant, will try with her partner to save herself desperately.

The Royal Treatment (Netflix): from 20 January also visible on Sky Q and via the app on Now Smart Stick. Genre: Romantic Comedy. Cast: Laura Marano, Mena Massoud, Chelsie Preston Crayford. Plot: Izzy is a hairdresser from New York, hired at the wedding of a charming prince. When the spark strikes between them, what will win in the end, love or duty?

Monaco: On the Brink of War (Netflix): from 21 January also visible on Sky Q and via the app on Now Smart Stick. Genre: Historical. Cast: Jeremy Irons, George MacKay, Jannis Niewohner, Sandra Huller, Liv Lisa Fries. Plot: former friends who now work for governments in opposition find themselves at the Munich Conference of 1938. The political climate is more tense than ever and the protagonists find themselves, in spite of themselves, to become spies to reveal a Nazi secret.

Monaco: On the Brink of War, Netflix Movie Trailer Released

The tender bar (Prime Video): from 7 January also visible on Sky Q and via the app on Now Smart Stick. Drama. Cast: Ben Affleck, Tye Sheridan, Christopher Lloyd, Lily Robe, Max Casella, Max Martini. Plot: George Clooney film that tells of a young man who has never met his father, a DJ from New York. Raising him is Charlie, who runs a bar. A peculiar and bizarre father figure.

The Tender Bar, the trailer for George Clooney’s film with Ben Affleck

Eternals (Disney +): from 12 January also visible on Sky Q and via the app on Now Smart Stick. Genre: Superheroes. Cast: Angelina Jolie, Richard Madden, Salma Hayek, Kumail Nanjiani, Gemma Chan, Kit Harington. Plot: The Eternals are a group of superhuman, created through experiments by cosmic beings called Celestials. Sent to Earth to protect humanity from the threat of the Deviants, created by the Celestials and become their bitter enemies. A merciless battle to impose the domination of one of the two races.