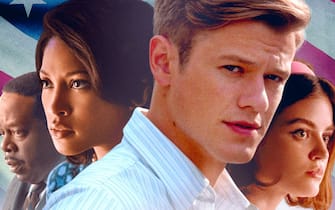 The color of freedom (Sky): from 2 June. True story of the grandson of a Ku Klux Klan member who joins the center for the human and civil rights movement

WATCH THE VIDEO: The color of freedom, an exclusive clip from the film

I’ll bring you back yours (Sky): from 3 June. In this French comedy Valentin told everyone that he was an orphan because he is ashamed to admit that his family is a family of workers. But when the truth begins to come out, amusing misunderstandings and complications will arise

Paw Patrol: The movie (Sky): from 5 June. A group of intrepid puppies with superpowers must prevent the evil Mayor Humdinger from turning the city into chaos

“PAW Patrol: The Movie”, the trailer taken from the animated series

The perfect garment (Sky): from 12 June. Javier Bardem is the protagonist of the dark comedy about the world of work, directed by Fernando León de Aranoa. The actor plays Blanco, a man who is willing to do anything to save the company

The perfect garment, trailer for the movie with Javier Bardem

Sing 2 – Getting stronger (Sky): from 13 June. Second successful chapter of the animated musical. Buster dreams of performing at the Crystal Tower Theater alongside his group of friends, but to do so he must attract the attention of the ruthless wolf Jimmy Crystal. Among the Italian voice actors also Frank Matano and Zucchero

Sing 2, the final trailer of the highly anticipated sequel

The many saints of New Jersey (Sky): from June 15th. Gangster movie, prequel to the series The Sopranos. Michael Gandolfini, son of James, plays the young Tony Soprano in 1960s Newark

The Many Saints of New Jersey, The Sopranos prequel trailer

The Arminuta (Sky): from 19 June. In the summer of 1975 a 13-year-old unwittingly becomes “the arminute” that is, her return, following her return to the biological family she knew nothing about.

The Arminuta, meaning and plot of the film

A monstrous family (Sky): from 20 June. Adalberto and Luana are expecting their first child and must communicate it to their parents. However, the woman does not know that Adalbert’s parents are a witch and a vampire. In the choral cast also Massimo Ghini, Lucia Ocone, and Pasquale Petrolo alias Lillo

Zlatan (Sky): from June 27th. Taken from the autobiography Io, Ibra, dedicated to Ibrahimovic, the biopic tells the football rise of a talented boy who later became a champion

Zlatan, watch the exclusive video clip of the film about Ibrahimović

The words I want to tell you (Sky): from 30 June. A touching true story. Dana Canedy and Sergeant Charles Monroe King are expecting a child. The man begins to write a diary full of teachings for the unborn child but dies during a mission. It will be Dana who collects all of King’s letters in a collection intended for her son

Interceptor (Netflix): June 3. Also visible on Sky Q and via the app on the Now Smart Stick. JJ Collins is a female captain in command of a remote missile base, threatened by a coordinated attack: in a few minutes she will have to call on years of tactical and military training to understand who she can trust.

Hustle (Netflix): From 8 June. Also visible on Sky Q and via the app on the Now Smart Stick. After discovering an exceptional player with a turbulent past, a basketball talent scout decides to persuade the sports phenomenon to move to the United States to prove he is up to the NBA. With Adam Sandler

Hustle: the official trailer of the Netflix movie with Adam Sandler

Spiderhead (Netflix): June 17th. Also visible on Sky Q and via the app on the Now Smart Stick. An inmate at a state-of-the-art penitentiary questions the purpose of the emotion-controlling drugs he is testing for a pharmaceutical genius. With Chris Hemsworth

Spiderhead: the official Italian trailer of the Netflix film with Chris Hemsworth

My fake boyfriend (Prime Video): June 27th. Also visible on Sky Q and via the app on the Now Smart Stick. Andrew has to deal with the pain of the end of the relationship with his partner. Friends invent a fake boyfriend for him on social media: the problem arises when Andrew falls in love with Rafi

Jurassic World – The domain (cinema): from 2 June. The film takes place four years after the destruction of Isla Nublar. Dinosaurs now live and hunt alongside humans around the world. This fragile balance will reshape the future and determine who between humans and dinosaurs is the true ruler

Night exterior – Part II (cinema): from 9 June. By Marco Bellocchio. 1978. Italy is from the conflict between the Red Brigades and the State. On March 16, 1978 Aldo Moro, the President of the DC, was kidnapped. His imprisonment will last fifty-five days, at the end of which his body will be found in the heart of Rome.

Lightyear – The true story of Buzz (cinema): from June 15th. Sci-fi adventure that leads to the origins of Buzz Lightyear, the hero to whom the toy of the same name was inspired, to introduce the legendary Space Ranger who has conquered entire generations of admirers

Elvis (cinema): from 22 June. Biopic about the king of rock, played by Austin Butler. From childhood in Tupelo to global success, deepened in the multifaceted relationship with the manager, the “Colonel” Tom Parker played by Tom Hanks