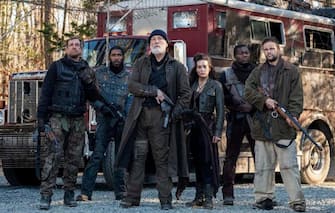 The Survivalist (Sky): from May 1st. John Malkovich and Jonathan Rhys Meyers grapple with the fall of civilization due to a viral epidemic, a post-apocalyptic world and a young woman immune to the virus

WATCH THE VIDEO: Diabolik, the trailer of the film

Diabolik (Sky): from 2 May. Directed by the Manetti Bros, Luca Marinelli, Miriam Leone, Valerio Mastandrea and Claudia Gerini give life to the film adaptation of the famous Italian comic by Angela and Luciana Giussani

Diabolik, the film with Luca Marinelli and Miriam Leone arrives in the first tv on Sky

Latin America (Sky): from 8 May. Elio Germano is Massimo Sisti, a professional and impeccable dentist from Latina, who lives with his young wife and two daughters in a large villa surrounded by greenery in Latina. One day, in his basement he encounters the absurd

Latin America: the review of the film by the D’Innocenzo brothers with Elio Germano

(Im) perfect criminals (Sky): from May 9. Riccardo, Amir, Pietro and Massimo are four security guards linked by a strong friendship. When Amir loses his job, his friends don’t hold back and decide to help him at any cost, amidst bad ideas and improvised criminal plans.

To Chiara (Sky): from May 17. A courageous girl suspended between the mafia and the future is the protagonist of the film awarded at the Quinzaine des Réalisateurs at the Cannes Film Festival 2021. After the sudden death of her father, 15-year-old Chiara decides to investigate her past, discovering inconvenient truths

A hero (Sky): from 24 May. Grand Jury Prize at the Cannes Film Festival 2021, the film tells the story of Rahim, in prison due to an unpaid debt. During a leave, he reaches out to his creditor trying to persuade him to withdraw the complaint, but the situation takes a different turn

I turn you around (Netflix): From 6 May. Also visible on Sky Q and via the app on the Now Smart Stick. Sofia Alvarez directs the adaptation of Sarah Dessen’s bestseller. During the summer before college, model student Auden meets Eli, who leads her to discover the carefree life she was missing out on.

The Ideal Family (Netflix): From May 18th. Also visible on Sky Q and via the app on the Now Smart Stick. Arantxa Echevarría directs Belén Rueda, Carolina Yuste and José Coronado in a nice comedy. Lucia finds herself having to deal with the strange and eclectic family members of her son’s fiancée, which will have an unexpected impact on her linear life.

The perfect match (Netflix): From May 19th. Also visible on Sky Q and via the app on the Now Smart Stick. A young woman importer of wines decides to open her own agency and to get in touch with a major Australian winery to get a contract. Here, however, she meets love

Archive (Prime Video): from May 5th. Also visible on Sky Q and via the app on the Now Smart Stick. Directed by Gavin Rothery, the sci-fi thriller sees George Almore grappling with a human-like artificial intelligence in an attempt to bring his deceased wife back to life. The first prototype is close to completion, but this phase will be the most delicate

No Time to Die (Prime Video): from 13 May. Also visible on Sky Q and via the app on the Now Smart Stick. Daniel Craig returns as Bond for the last chapter of the famous saga. After leaving the Secret Service, Bond enjoys a quiet life in Jamaica when he receives a call for help from his old friend Felix Leiter.

007 No Time To Die, the final trailer

Resident Evil: Welcome to Raccoon City (Prime Video): From May 28th. Also visible on Sky Q and via the app on the Now Smart Stick. Johannes Roberts directs the return to the origins of the saga. A group of survivors search for the hidden truth behind the Umbrella Corporation as they battle bloodthirsty zombies

Respect (Prime Video): from 30 May. Also visible on Sky Q and via the app on the Now Smart Stick. Liesl Tommy directs the film about the life and rise of music icon Aretha Franklin. Between career and international fame, however, her success is accompanied by marital abuse

Respect, the trailer for the film starring Jennifer Hudson as Aretha Franklin

Sneakerentola (Disney +): from 13 May. Also visible on Sky Q and via the app on the Now Smart Stick. Set in New York, the film brings the tale of Cinderella in the form of a modern musical. El is an aspiring sneaker designer from Queens, but works as a simple warehouse keeper, keeping his dreams in a drawer. Meeting the rich Kira King will change his life

Sneakerella, the trailer of the reinterpretation of Cinderella coming to Disney +

Cip and Ciop Special Agents (Disney +): From May 20th. Also visible on Sky Q and via the app on the Now Smart Stick. The two Disney-designed squirrels are back as protagonists in a film halfway between live action and animation. The two, however, find themselves older than in the past, no longer friends and with a profoundly different everyday life. The challenge will be to get back together to help their mutual friend who has mysteriously disappeared

The Valet (Disney +): From May 20th. Also visible on Sky Q and via the app on the Now Smart Stick. The protagonist of the comedy is Olivia, a paparazzi movie star together with her lover married to Vincent. Parking attendant Antonio is hired in an attempt to cover up the scandal, but the fiction seems to turn into something more

Doctor Strange in the Multiverse of Madness (cinema): from May 4th. Directed by Sam Raimi, the new Marvel film sees Benedict Cumberbatch return as Doctor Strange, who with the help of new and old allies will have to face dangerous alternate realities on a journey into the Multiverse.

Doctor Strange in the Multiverse of Madness: the new Italian teaser

Firestarter (cinema): from 12 May. Keith Thomas Brown directs Zac Efron, Gloria Reuben and Ryan Kiera Armstrong in the horror film based on the Stephen King novel of the same name. The protagonist is a little girl, with the mysterious power to ignite things with the mind

Firestarter: trailer for the new film based on Stephen King

American Night (cinema): from May 19th. Maria Grazia Cucinotta, Jonathan Rhys Meyers and Emile Hirsch are the protagonists of the film set in New York. At the center are the apparently distant events of Michael Rubino, the new head of the mafia in the Big Apple and lover of painting, and of John Kaplan, a chaotic art dealer who cannot be beaten in identifying fakes.

Top Gun: Maverick (cinema): from May 25. Tom Cruise returns to take on the role of Vessel Captain Pete “Maverick” Mitchell, one of the best pilots in the navy. Called to train a team of Top Gun students, Nick “Rooster” Bradshaw, son of Goose, Mav’s deceased flightmate, will also be training for a secret mission.