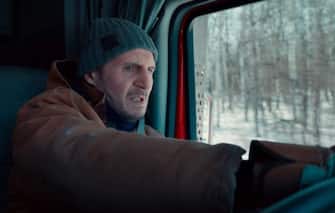 The Iceman – The Ice Road: from 5 September on Sky. A methane leak causes a disastrous collapse in a diamond mine in northern Canada. To save the trapped miners and reach the mine, you have to cross a frozen lake that could crack in the spring season

Rosanero: from 9 September on Sky: Totò, forty years old, is an emerging boss of organized crime in the Neapolitan area. Rosetta is a ten-year-old girl who is in fifth grade. One morning Totò is hit in the chest by a bullet. In that same instant, Rosetta falls from a swing and hits her head. The girl and the boss are operated on, but when they recover from the coma they both have changed

Rosanero, the trailer for the Sky Original film with Salvatore Esposito

Matrix Resurrections: from 12 September on Sky. After the cult trilogy, the highly anticipated new chapter by visionary director Lana Wachowski reunites Keanu Reeves and Carrie-Anne Moss in the iconic roles of Neo and Trinity

WATCH THE VIDEO: Matrix Resurrection, the trailer of the film

Marry Me – Marry Me: from September 19th on Sky. Kat Valdez is a star who has to take the stage with her boyfriend Bastian to sing their new hit and for a marriage proposal that will be made in front of millions of followers. But just before stepping on the stage, Kat discovers that Bastian is cheating on her

Marry Me – Marry Me, the movie trailer

Morbius: from 26 September on Sky. Jared Leto plays the role of Marvel’s anti-hero. Michael Morbius is a boy of Greek origin who suffers from a rare and incurable blood disease

Morbius, the final trailer of the film with Jared Leto

Judas And The Black Messiah: from 9 September on Netflix (also visible on Sky Q and via the app on Now Smart Stick). Set in 1968, the film centers on the figures of Fred Hampton and William O’Neal. Hampton became leader of the Black Panthers, as African-American struggles intensified more and more

Judas and the Black Messiah, the trailer

Do Revenge, the trailer for the Netflix movie

Lou: From September 23 on Netflix (also visible on Sky Q and via the app on Now Smart Stick). During a devastating storm, a girl is kidnapped. Her mother joins forces with a mysterious neighbor and together they set out in pursuit of the kidnapper. The journey tests their limits and exposes the dark secrets of the past

Lou, the trailer for the film is out

Kobe – an Italian story: from 15 September on Amazon Prime Video (also visible on Sky Q and via the app on Now Smart Stick). The documentary tells of Kobe Bryant, one of the greatest basketball players in history, who grew up on the basketball courts of the Italian province

Goodnight Mommy: from September 16 on Amazon Prime Video (also visible on Sky Q and via the app on Now Smart Stick). A woman joins her children after a long absence, due to a radical plastic surgery. However, the children begin to suspect that she is not their real mother

Goodnight Mommy, Naomi Watts is a terrifying mother in the trailer

My Best Friend’s Exorcism: from 30 September on Amazon Prime Video (also visible on Sky Q and via the app on Now Smart Stick). It’s 1988 and best friends Abbey and Gretchen are discovering kids and pop culture, and they face a paranormal force that clings to Gretchen without letting go.

Thor: Love and Thunder: from 8 September on Disney Plus (also visible on Sky Q and via the app on Now Smart Stick). Thor returns with the fourth chapter of the saga, which will see him protagonist alongside Jane Foster. Thor’s search for a dimension of inner peace is interrupted by the arrival of the galactic killer Gorr the God Butcher, bent on destroying all the gods. Thor will thus join his forces with Valkyrie, Korg and ex-girlfriend Jane Foster who will prove his uniqueness to him

Thor: Love and Thunder, released a new trailer of the film

Pinocchio, released the trailer of the live-action

Hocus Pocus 2: from 30 September on Disney Plus (also visible on Sky Q and via the app on Now Smart Stick). It has been 29 years since someone lit the Black Flame Candle and resurrected the 17th century sisters, who are seeking revenge. Now it’s up to three high school students to stop the witches from wreaking havoc

The trailer for Hocus Pocus 2: the Sanderson sisters are back

Don’t Worry Darling: from 22 September in cinemas. Alice and Jack are lucky enough to live in the idealized community of Victory, the city created by an experimental company that hosts, together with their families, the men who work on the top-secret Victory project. But soon, cracks will begin to appear in their idyllic life

The Immensity: from 15 September to the cinema. Rome, 1970s: Clara and Felice have just moved into a new apartment. Their marriage is over: they no longer love each other, but they can’t break up. To keep them united, only the children on whom Clara pours all her desire for freedom

The Immensity, the trailer of Emanuele Crialese’s film with Penélope Cruz

DC League of Super Pets: from 1 September in cinemas. When Superman and the rest of the Justice League are kidnapped, Krypto the Supercane must convince a group of pets consisting of Ace the Hound, MP the Puffy Pig, Merton the Turtle and Chip the Squirrel, to manage their newly discovered powers and help him to save the superheroes

DC League of Super-Pets, the teaser of the animated film. VIDEO

Murder in the West End: September 29 in theaters. In London’s West End of the 1950s, plans for a film version of a successful play come to a halt after the murder of a key member of the crew

I eat your heart: from 22 September to the cinema. Burned by the sun and hatred, the Gargano promontory is contested by criminals who seem to have come from a remote time governed by the law of the strongest. An archaic land from the far west, where blood washes with blood

I eat your heart, the trailer for the film with Elodie