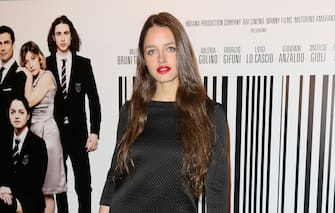 Class 1989, born in Milan to an Apulian father and a Tuscan mother, Matilde Gioli made her debut in 2014 in the film Human capital by Paolo Virzì. Her interpretation earned her the Guglielmo Biraghi Award during the Nastri d’Argento 2014 and the Alida Valli Award during the Bari International Film Festival

WATCH THE VIDEO: Matilde Gioli nominated Knight of the Republic

Also in 2014, he participates in Gomorrah – The series. She plays Pearl in episode 5, season 1, entitled The roar of the lioness

Matilde Gioli, all the roles. PHOTO

In 2015 she plays Chiara Liuzzi in Dad’s beautiful, film directed by Guido Chiesa. In the film he joins Diego Abatantuono, who plays Chiara’s father, Vincenzo

In 2017 she covers the role of Melania in the film Mom or Dad? by Riccardo Milani, remake of Papa ou maman? directed by Martin Bourboulon in 2015

4 Half, the cast of the film with Ilenia Pastorelli and Matilde Gioli

In 2017 he also participates in the film The Startup, directed by Alessandro D’Alatri. In the film she gives voice and face to Cecilia

In 2018 she was directed by Giovanni Veronesi in the film King’s Musketeers – The penultimate mission. In the film she is Olympias, Queen Anne’s handmaid, played by Margherita Buy

From 2020 he joins the cast of the TV series Doc – In your handsin which she plays Giulia, doctor of internal medicine and Andrea’s secret companion, played by Luca Argentero

Take part in the film in 2020 It’s for your own good, under the direction of Rolando Rovello. In the film she is Valentina, daughter of Arturo, played by Marco Giallini

In 2022 he participates in the Netflix production Four halves directed by Alessio Maria Federici. In the film she is Giulia, a researcher and protagonist of her story together with her three friends Chiara, Dario and Matteo