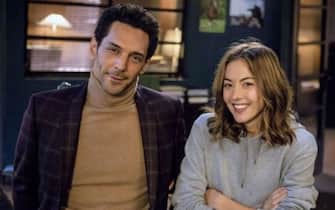 Balthazar 4 (Sky): from 5 April. Genre: Crime. Plot: Dr. Raphaël Balthazar is a charming, intelligent, brilliant at work, but with an absolutely maddening character. For Hélène Bach, the police captain, it is not easy to work with Raphaël. However, he must find a way to do it because only by joining forces can they think they will be able to solve the complicated murder case that is presented to the authorities.

WATCH THE VIDEO: Devils 2, the teaser trailer of the second season

Ordinary Joe (Sky): from 13 April. Genre: Drama. Plot: Life is made up of choices and sometimes a single moment can change it forever. Joe Kimbreau knows this well, and once he graduates he doesn’t know which way to take. From the night of the ceremony, his existence takes a decidedly unexpected turn, unfolding in three parallel universes: in one Joe is a successful rock star with many lights and some shadows, in another a nurse who works too much, and in another still a policeman, just like the late father

Ordinary Joe, the trailer for the new series aired on Sky and NOW

Raised by wolves 2 (Sky): from 15 April. Genre: Science, Drama. Plot: In the 22nd century, two androids, fleeing with human embryos from a war-torn Earth, are tasked with raising human children on a mysterious planet. After a few years, only one of the children survives and it turns out that on the planet there are other terrestrials, who have also fled

Raised by Wolves – A new humanity, unveiled the trailer for the sci-fi series

Mystery Queens (Sky): from 15 April. Genre: Comedy, drama, mystery. Plot: The three Stone sisters use their knowledge of crime – both real and fictional – to help their detective niece solve murders in the quaint English village of Wildemarsh.

Devils 2 (Sky): from 22 April. Genre: Financial thriller. Plot: The new episodes will be set four years after the events of the first season, in 2016, with Brexit upon us. Massimo has decided to undertake a policy of pro-Chinese acquisitions, bringing in new investors and team members from China. But it is his old mentor Dominic Morgan who comes back and warns him: the new Chinese partners are ready to betray him

Devils 2, the official trailer of the TV series with Borghi and Dempsey

Outlander 6 (Sky): from 30 April. Genre: Historical drama. Plot: Claire and Jamie are ready to fight to protect those they love, as they face the trials and hardships of life in colonial America

Elite 5 (Netflix): from 8 April. Also visible on Sky Q and via the app on the Now Smart Stick. Genre: Teen, thriller. Plot: The start of a new semester in Las Encinas brings with it a new victim, a new culprit and a new mystery, as students find themselves inundated with secrets

Elite 5, released a teaser of the Netflix series

Better Call Saul 6 (Netflix): from 19 April. Also visible on Sky Q and via the app on the Now Smart Stick. Genre: Drama, comedy. Plot: From the cartel to the courthouse, from Albuquerque to Omaha, the sixth season stars Jimmy, Saul and Gene, as well as Jimmy’s complex relationship with Kim, who is in the midst of his existential crisis.

Better Call Saul 6, trailer of the latest season of the Breaking Bad spin-off

Ozark 4 (Netflix): from 29 April. Also visible on Sky Q and via the app on the Now Smart Stick. Genre: Thriller. Plot: Freedom from the cartel seems close at hand, but the fracturing of family ties could bring the Byrdes to their final ruin.

Wolf Like Me (Prime Video): from 1 April. Also visible on Sky Q and via the app on the Now Smart Stick. Genre: Comedy, drama. Plot: In the suburbs of Adelaide, South Australia, widower Gary lives with his daughter Emma. Due to an accident, Gary meets Mary and the two start dating. But when the man discovers the woman’s dark secret, he runs away in terror. Despite this, their paths continue to cross

The school of mysteries 2 (Prime Video): from 1 April. Also visible on Sky Q and via the app on the Now Smart Stick. Genre: Mystery, teen. Plot: After Rita’s death, no one doubts that a serial killer, a follower of the Crow’s Nest, is responsible for the crimes. But Amaia, Paul, Paz, Eric and Julio will not stand still and watch, much less now that, thanks to Adèle, they think they can find Manuel still alive. Will they be able to save him in time?

Bang bang baby (Prime Video): from 28 April. Also visible on Sky Q and via the app on the Now Smart Stick. Genre: Crime, drama. Plot: Inspired by a true story, the plot of the first Italian series of Amazon tells the story of Alice, a teenage girl, shy and insecure, who in a Milan in the midst of the boom of the eighties, becomes the youngest member of the mafia, not for money, ambition or desire for power, but to win the love of his father

The ignorant fairies (Disney +): from 13 April. Also visible on Sky Q and via the app on the Now Smart Stick. Genre: Drama. Plot: Massimo, Antonia’s husband, loses his life in a car accident. The woman, depressed by what happened, finds herself discovering the second secret life of her long-time partner. He was having a homosexual relationship with a man named Michele. When Antonia meets her, she begins to feel something unexpected

The ignorant fairies, teaser and release date of the TV series

The Kardashians (Disney +): from 14 April. Also visible on Sky Q and via the app on the Now Smart Stick. Genre: Reality. Plot: The most famous and beloved family returns with a new series that offers complete access to their lives. Kris, Kourtney, Kim, Khloé, Kendall and Kylie return to the cameras to tell the truth about their stories

The Kardashians, trailer of the original series to be released on April 14

The girl in the woods (Peacock): from April 1st. Genre: Supernatural, teen, drama. Plot: Carrie is a mysterious warrior, who escaped from a colony that protects the world from monsters hidden behind a secret door in the woods

Dahmer on Dahmer: A Serial Killer Speaks (Peacock): from April 1st. Genre: Documentary, crime. Plot: The series catapults viewers into Jeffrey Dahmer’s psyche, providing a unique glimpse into the life of a serial killer who rocked the nation.

Kim Kardashian West: The Justice Project: (Peacock): from April 1st. Genre: Documentary. Plot: The series follows Kim Kardashian as she uses all of his influence to support criminal justice reform in the United States

MacGruber (Peacock): From 11 April. Genre: Action, comedy. Plot: After being in prison for over a decade, the latest American hero and super patriot MacGruber is finally released. His mission: to eliminate a mysterious villain from his past, the brigade commander Enos Queeth

The Real Housewives of Beverly Hills 3 (Peacock): From 11 April. Genre: Reality. Plot: The series documents the life of a group of wealthy women (only some of whom are real housewives) residing in Beverly Hills

The Real Housewives of New York City 3 – 4 (Peacock): From 11 April. Genre: Reality. Plot: The series documents the life of a group of wealthy women (only some of whom are real housewives) living in New York

Homicide for the Holidays (Peacock): From 11 April. Genre: Crime. Plot: For most people, the winter holidays mean bringing family and friends together to eat, drink and create joyful memories that will last a lifetime; but, for others, it’s a time when emotions run high, anger and animosity set in and can trigger an explosive combination of seething resentments and secrets

Below Deck (Peacock): from April 22nd. Genre: Reality. Plot: The program chronicles the lives of crew members who work and reside aboard a superyacht during the charter season. It shows the crew as they deal with personal problems and the dynamics of their professional career