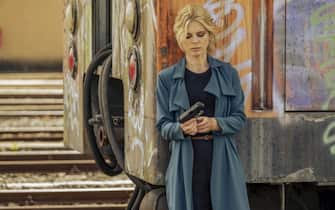 Lady Fox (Sky): from 1 July. Genre: Detective, Drama. Plot: Former British spy Sylvia Fox arrives in Italy for the wedding of her niece, disillusioned with her work and eager for a vacation. But when the groom goes missing, Sylvia decides to solve the mystery and save her granddaughter from disaster

WATCH THE VIDEO: Stranger Things 4, the trailer for volume 2

Westworld 4 (Sky): from 4th July. Genre: Sci-fi, Drama. Plot: The new episodes are set seven years after the events of the third season. Caleb and Maeve have separated, Bernard, connected to a mysterious machine, seems to be able to see the future, while the Black Man is more evil than ever

Westworld, the trailer for the fourth season

The Rising – Hunt for my killer (Sky): from 14 July. Genre: Drama, Thriller, Supernatural. Plot: Neve Kelly is dead. She is now scared and confused by this new (non) existence, but when she finds out that she has been killed, she decides to take her own justice by taking advantage of her new supernatural abilities to go where the police cannot investigate.

The Blacklist 9 part B (Sky): from 17 July. Genre: Crime, Drama. Plot: The team disbanded and after Liz’s death, Red disappeared. Old grudges die hard and Red is determined to find a culprit for what he believes was an avoidable death.

Das Boot 3 (Sky): from 19 July. Genre: War Drama. Plot: In this third season, Forster is sent to Lisbon, Portugal, to investigate the existence of a German mole. Meanwhile, Ehrenberg is sent overboard again on a mission that could potentially turn the tide of war

Das Boot 2, the photos of the season finale

Sanditon 2 (Sky): from 20 July. Genre: Period Drama, Romance. Plot: The second season picks up a few months after the events of the finale of the first chapter. In the new episodes, Charlotte returns to Sanditon, as a group of army officers descend on the city, thus creating romantic and business situations.

Stranger Things 4, volume 2 (Netflix): from 1st July. Also visible on Sky Q and via the app on the Now Smart Stick. Genre: Horror, Sci-Fi. Plot: In the last two episodes the final fight will take place between the good, represented by Eleven and his friends, and the Evil that dwells in the Upside Down

Better Call Saul 6 part 2 (Netflix): From 12 July. Also visible on Sky Q and via the app on the Now Smart Stick. Genre: Drama. Plot: The second half of the sixth season will tell the rest of the saga of Jimmy McGill aka Saul Goodman to bring viewers to the moment when Saul meets Jesse Pinkman and Walter White

Better Call Saul 6, the new teaser trailer of the second part is dedicated to Kim

Resident Evil (Netflix): From July 14. Also visible on Sky Q and via the app on the Now Smart Stick. Genre: Horror, Action. Plot: Years after a global virus-induced apocalypse, Jade Wesker vows to make those responsible pay her as she battles the infected to survive

Virgin River 4 (Netflix): From July 20. Also visible on Sky Q and via the app on the Now Smart Stick. Genre: Romance, Drama. PLOT: Mel is happy because she is finally about to become a mother. What torments her, however, is the doubt about the father of her child. Is it Mark, her deceased husband, or Jack?

Virgin River, revealed the release date of the fourth season

The Terminal List (Amazon Prime Video): from 1 July. Also visible on Sky Q and via the app on the Now Smart Stick. Genre: Drama, Action. Plot: The series follows the story of James Reece, played by Chris Pratt, after his Navy Seal team is ambushed during a high-risk covert operation. When the man returns home to his family, he does not remember what happened and questions his responsibilities

Terminal List, the trailer of the series with Chris Pratt