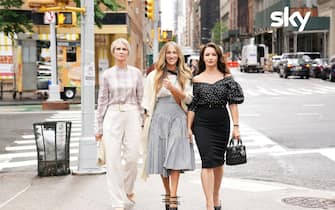 Hippocrates – Residents in the ward (Sky): from 3 December. Genre: Medical drama. Plot: Due to some drastic health prevention measures, the doctors at the head of the department find themselves in quarantine, at home, for 24 hours. Three young, inexperienced doctors will have to manage the department on their own.

WATCH THE VIDEO: Sex and the City, the teaser of the revival And Just Like That

Paris Police 1900 (Sky): from 3 December. Genre: Drama. Plot: Paris, 1899, the body of an unknown woman is found in the Seine. The investigation will prompt a young and ambitious inspector to uncover a secret of the government’s upper echelons.

The best films to see in December coming out in theaters and in streaming. PHOTO

And just like that… (Sky): from December 9th. Genre: Drama, Comedy, Romance. Plot: Carrie, Miranda and Charlotte return, grappling with their lives in a whole new phase, going from thirty to fifty, between new problems and old love affairs.

And Just Like That…, the sequel to Sex and the City on Sky in December

Irish Crime (Sky): from 11 December. Genre: Crime. Plot: Cathrin is a criminal psychologist. She finds herself assisting the Galway police when her husband’s remains are found in a mass grave filled with dead children. She is ready to dig deep to get the truth, even as old torments grip her again.

Made for love (Sky): from 13 December. Genre: Dramedy, Sci-fi. Plot: Love and divorce at the center of this very cynical black comedy, which stars Hazel Green. She is a woman in her 30s who intends to live to the full after 10 years spent in a suffocating marriage to control-freak billionaire Byron Gogol.

Yellowstone 4 (Sky): from 14 December. Genre: Drama. Plot: The Duttons are back after the dramatic events of the final season finale. It is time for revenge but, at the same time, to mend the enormous tears in the family and above all to have the strength to look to the future.

Yellowstone 4, the trailer for the fourth season

The Blacklist 9A (Sky): from 19 December. Genre: Crime. Plot: First part of the ninth and final season of the series starring Raymond “Red” Reddington. The show is set 2 years after Lizzie’s death, with Red and the other members of the task force coming together to fight a new conspiracy.

At home everyone is fine (Sky): from 20 December. Genre: Drama. Plot: A painful secret returns from the past to haunt the Ristuccia family, owners of one of the most famous restaurants in Rome, Ristorante San Pietro.

At home all well, the trailer of the TV series by Gabriele Muccino

Two weeks to live (Sky): from 26 December. Genre: Dramedy. Plot: Kim is a girl who lost her father under mysterious circumstances when she was just a little girl. The mother, after this tragedy, raised her daughter in the open countryside, in total isolation, teaching her bizarre survival techniques. Convinced that the world will end in two weeks, she says she is ready to kill the man who killed her father.

Temple 2 (Sky): from December 27th. Genre: Drama. Plot: Daniel Milton is a respected surgeon who runs an illegal underground clinic where he treats city criminals. In the second season he will take even more risks to be able to keep up with his lies.

Cryptid – The Nightmare of the Lake (Sky): from December 30th. Genre: Horror. Plot: A series of terrifying events sweeps across a small town. A group of students will be forced to face their deepest fears in order to get the better of a supernatural force.

The Ibiza Affair (Sky): from December 31st. Genre: Drama. Plot: All the Ibiza-gate events, which ultimately led to the resignation of Austrian Vice Chancellor Heinz-Christian Strache. The series reconstructs the facts that led to the meeting between him and a woman, to whom he confides his plans for his country.

La casa di carta 5 Vol. 2 (Netflix – also visible on Sky Q and via app on Now Smart Stick): from 3 December. Genre: Crime, Drama. Plot: In the first part of the last season there was an all-out war between the gang and the army. Only the extreme gesture of Tokyo saved the group. In the second part, the Professor will intervene personally to help his parents. Many questions but one above all: what will be the role of the son of Berlin?

The Witcher 2 (Netflix – also visible on Sky Q and via app on Now Smart Stick): from December 17. Genre: Adventure, Fantasy. Plot: Geralt of Rivia finds himself having to train the young Ciri, protecting her from the outside world but above all from the power she holds within herself.

The Witcher 2, over a million dollars per episode paid to Henry Cavill

Emily in Paris 2 (Netflix – also visible on Sky Q and via app on Now Smart Stick): from 22 December. Genre: Comedy, Romance. Plot: New adventures in Paris for young Emily, overwhelmed by guilt after what happened in the last season finale. He will try to move on and live a little more carefree.

Emily in Paris 2, the trailer of the series with Lily Collins

Cobra Kai 4 (Netflix – also visible on Sky Q and via app on Now Smart Stick): from December 31st. Genre: Adventure, Drama. Plot: Johnny and Daniel got together, surprisingly. They decided to work together to get the better of Kreese’s new Cobra Kai. Waiting for the tournament that will decide who will have to leave the city.

The Ferragnez (Prime Video – also visible on Sky Q and via app on Now Smart Stick): from December 9th. Genre: Reality. Plot: The life of Chiara Ferragni, Fedez and Leone shows itself in a turbulent 2020, between work and a bit of home “madness”.

The Ferragnez, the trailer for the tv series by Chiara Ferragni and Fedez is out

The Book of Boba Fett (Disney Plus – also visible on Sky Q and via app on Now Smart Stick): from 29 December. Genre: Adventure, Science Fiction. Plot: After appearing in The Mandalorian, Boba Fett makes his own return to Tatooine, where he takes control of the old territory of Jabba the Hutt.

The Book of Boba Fett, new trailer for the Star Wars TV series