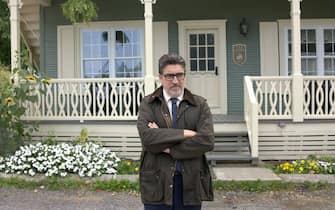 Commissioner Gamache – Mysteries at Three Pines (Sky): from 8 January. Plot: set in Canada, Quebec, the series is a crime story starring Armand Gamache (Alfred Molina), a commissioner with distinctive qualities, dealing with a series of murders in the town of Three Pines

The Miniaturist (Sky): from 11 January. Sinopsys: Amsterdam, 1686. The eighteen-year-old Nella di lei moves to the city to live there with her husband, the rich merchant Johannes Brandt, who is twenty years her senior. The house turns out to be much more than a pastime and the mysterious appearance of objects inside her makes Nella suspicious of her, who begins to investigate the secrets that surround her

The last of us (Sky): from 16 January. Plot: The story takes place twenty years after the destruction of modern civilization. Joel is tasked with getting 14-year-old Ellie out of a heavily guarded quarantine zone. Ellie is the only human being immune to the fungus, and perhaps she is the only hope of getting a vaccine

The Last of Us, everything you need to know about the TV series inspired by the video game

Call my agent – Italy (Sky): from 20 January. Plot: welcome behind the scenes of Italian show business from the point of view of those involved in managing the careers – and lives – of the stars, the agents. Between hectic days and social nights, it is their private life that loses out… But deep down they have too much fun to notice. With the departure of the founder Claudio Maiorana, things will get a little more complicated

Call My Agent – Italy, the trailer of the series on Sky from 20 January

Kaleidoscope (Netflix): from 1 January (also visible on Sky Q and via the app on the Now Smart Stick). Plot: The series takes place over 25 years and follows a band of skilled thieves as they attempt to open a seemingly inviolable vault in order to obtain the greatest loot in history

Kaleidoscope, the trailer for the new Netflix thriller series with Giancarlo Esposito

The lying life of adults (Netflix): from 4 January (also visible on Sky Q and via the app on the Now Smart Stick). Plot: Giovanna faces the transition from childhood to adolescence by discovering the different faces of Naples during the 90s

The lying life of adults, the trailer of the tv series

I’m Lillo (Prime Video): from 5 January (also visible on Sky Q and via the app on the Now Smart Stick). Plot: Lillo has to choose between the fame of his alter ego Posaman and his private life, because her wife can’t stand him anymore. So together with some actor and comedian friends from Pietro Sermonti, to Paolo Calabresi, from Caterina and Corrado Guzzanti to Valerio Lundini, from Michela Giraud to Edoardo Ferrario and many others, Lillo will try to find himself beyond the mask he has built

I’m Lillo, trailer of the TV series and interviews with the protagonists. VIDEO

Hunters 2 (Prime Video): from 13 January (also visible on Sky Q and via the app on the Now Smart Stick). Plot: The Hunters must unite to hunt down the most notorious Nazi in history, Adolf Hitler, who is hiding out in South America

WATCH VIDEO: What we know about Hunters 2

Star Wars: The Bad Batch 2 (Disney+): from 4 January (also visible on Sky Q and via the app on the Now Smart Stick). Plot: The Bad Batch continues its journey through the Empire following the collapse of the Republic. There will be numerous adventures to face that will lead the protagonists towards dangerous missions

WATCH THE VIDEO: Star Wars: The Bad Batch 2, everything we know

Criminal Minds: Evolution (Disney+): from 18 January (also visible on Sky Q and via the app on the Now Smart Stick). Plot: Members of the BAU investigate the ever-growing threat of a serial killer ring built during the pandemic years

That Dirty Black Bag (Paramount+): From January 25th. Plot: the series is inspired by the world of spaghetti westerns and tells the story of Red Bill, a bounty hunter who decapitates his victims by carrying their heads in a black bag, and sheriff Arthur McCoy