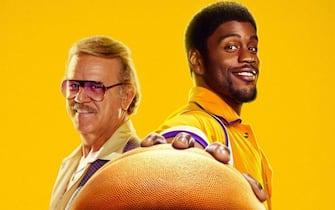 Winning Time – The rise of the Lakers dynasty (Sky): from 2 June. Genre: Sport Drama. Plot: the series tells the decade that led the Los Angeles Lakers to become the brightest star in the firmament of world basketball

WATCH THE VIDEO: Winning Time, the trailer for the Los Angeles Lakers series

Hammarvik 2 – Love and other murders (Sky): from 3 June. Genre: Crime. Plot: Johanna Strand continues to carry out new murder investigations, but each case she constantly takes new and unexpected turns, and it soon seems impossible to trust anyone.

Run – love escape (Sky): from 6 June. Genre: Comedy, Romance, Thriller. Plot: Ruby and her boyfriend Billy made a pact more than 15 years ago: if one of them writes “RUN” and the other answers the same way, the two will leave everything to embark on a journey across America

The Staircase – A suspicious death (Sky): from 8 June. Genre: Crime, Drama. Plot: Mystery writer Michael Peterson is accused of beating up his wife Kathleen after she was found dead at the bottom of his house. With Colin Firth and Toni Colette

The Staircase – A suspicious death, the trailer for the tv series

A timeless love (Sky): from 13 June. Genre: Drama. Plot: the complicated love story between Clare and Henry, a couple whose marriage has a problem: he has a genetic disease that makes him travel through time

A timeless love, the series on Sky from 13 June. The trailer

The village of the damned (Sky): from 17 June. Genre: Sci-fi. Plot: One day, in the small town of Midwich, some people and some animals pass out for no reason. For twelve hours no one can enter the village, then suddenly everything returns to normal. But not quite. Because something truly inexplicable happened. Every woman of childbearing age became pregnant

The baby (Sky): from 17 June. Genre: Horror, Comedy. Plot: 38-year-old Natasha suddenly finds herself with a child who is not hers. She doesn’t know where she came from or who she is from, but she notices that terrible things happen to anyone who offends him.

Agatha Christie – Why didn’t they ask Evans? (Sky): from 25 June. Genre: Mystery. Plot: three episodes for one of Agatha Christie’s most successful novels. Bobby Jones and French Lady “Frankie” Derwent try to solve a crime after Bobby discovers the body of a dying man. The victim, before dying, raises a mysterious question: Why didn’t they ask Evans?

Kourtney & Kim Take Miami (Peacock): from 1st June. Genre: Reality. Plot: The series follows sisters Kourtney and Kim Kardashian as they open a second Dash location in Miami Beach, Florida. This is the first spin-off of Keeping Up with the Kardashians

Girls5eva 2 (Peacock): from June 6th. Genre: Musical, Comedy. Plot: the story of Girls5eva, a women’s group that rose to fame in the 2000s but remained on the crest of the wave for a very short time, until the tragic death of leader Ashley due to an accident in the pool

The Real Housewives of New Jersey (Peacock): from 13 June. Genre: Reality. PLOT: The series documents the life of a group of affluent women residing in New Jersey

The Real Housewives of New York City (Peacock): from June 14th. Genre: Reality. PLOT: The series documents the life of a group of wealthy women residing in New York

The Real Housewives of Potomac (Peacock): from June 28th. Genre: Reality. PLOT: The series documents the life of a group of wealthy women who reside in Potomac

The Umbrella Academy 3 (Netflix): June 22nd. Also visible on Sky Q and via the app on the Now Smart Stick. Genre: Fantasy. Plot: As the superheroes of Umbrella Academy prepare to save the world, a new enemy arrives: the Sparrow Academy

The paper house: Korea (Netflix): From June 24th. Also visible on Sky Q and via the app on the Now Smart Stick. Genre: Drama. Plot: A brilliant strategist and his gang of thieves attempt to land an unprecedented heist on the Korean peninsula

The Paper House: Korea, the new teaser trailer of the Netflix TV series

Love, Victor (Disney +): from June 15th. Also visible on Sky Q and via the app on the Now Smart Stick. Genre: Drama. Plot: the last eight episodes of the series. Victor and his friends will face the last year of high school and then they will have to finally say goodbye: a new life awaits them

The Boys 3 (Prime Video): June 3rd. Also visible on Sky Q and via the app on the Now Smart Stick. Genre: Fantasy. Plot: The vigilante group tries to unravel the truth about the Seven and Vought, the multibillion dollar company that manages superheroes and covers all their dirty secrets

The Boys 3, released the official trailer

Fairfax 2 (Prime Video): June 10th. Also visible on Sky Q and via the app on the Now Smart Stick. Genre: Comedy, animation. Plot: the animated comedy follows the misadventures of four middle school students trying to find their place in the culture of the moment

Summer in your eyes (Prime Video): June 17th. Also visible on Sky Q and via the app on the Now Smart Stick. Genre: Drama. Plot: the story revolves around a love triangle that is created between a girl and two brothers, on the relationship between mothers and children on the lasting power of strong female friendships