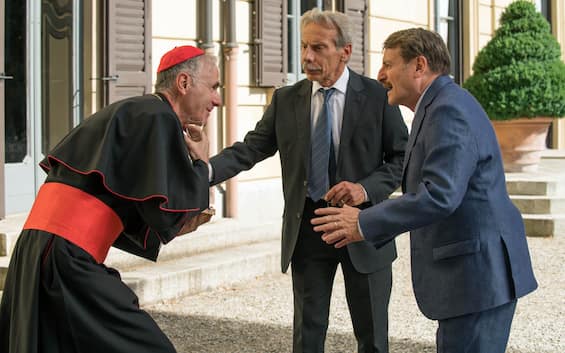 Massimo Venier he returned to directing Aldo, John And James. The big day is the title of the new Christmas film, of which the trio shared the trailer on their YouTube channel.

THE BIG DAY, THE TRAILER OF THE NEW CHRISTMAS FILM

Aldo, Giovanni and Giacomo are among the great protagonists of Italian cinema with hugely successful films, among which Three men and a leg, The legend of Al, John and Jack, That’s life And ask me if I’m happy (PHOTO), the latter among the highest grossing films of all time in Italian cinema.

The trio is now ready to return to the big screen. The film will tell the preparations for the wedding of Elio and Caterina, sons of Giacomo and Giovanni respectively, in a sumptuous villa on Lake Como; to upset the quiet will be the arrival of Aldo, the new partner of Margherita, ex-wife of Giovanni.

The trailer showed the first images of the work between lightheartedness and fun, the story and the screenplay are by the three protagonists, the director, David Lantieri and of Michele Pilgrims. In the cast Antonella Attili, Elena Lietti And Lucy mascino.

The film will debut on the big screen at Christmas to bring joy and warmth to the audience. The original music is by Brunori Sas.

This is the official plot in the caption of the film: “In a large villa on Lake Como, everything is ready to celebrate the wedding of Elio and Caterina. It will be the happiest day of their lives and also that of their parents, especially their respective fathers, Giacomo and Giovanni. The two have known each other since school and they shared everything: the family business – Segrate Arredi – their loved ones, their holidays… The marriage of their children represents the most emotional seal to their fraternal, indissoluble friendship. This is why they spared no expense: three days of celebrations, a Cardinal to celebrate the wedding, fine wines, starred chefs… And to direct everything, a very expensive maître who calls himself ‘the Riccardo Muti of catering'”.

The text then continues: “It is a pity that together with Margherita, Giovanni’s ex-wife as well as mother of the bride, Aldo, her new partner, also arrives at the wedding. Sympathetic, outgoing and above all messy to the highest degree, the newcomer falls upon the wedding like a tornado, threading a series of gaffes and hilarious but above all very expensive incidents. Giacomo and Giovanni try to stem it in every way, but under Aldo’s blows cracks open from which a hidden malaise emerges, destined to question the friendship between Giovanni and Giacomo, their marriages and beyond. And that will force everyone to come to terms with their doubts and with the courage it takes to indulge in happiness”.