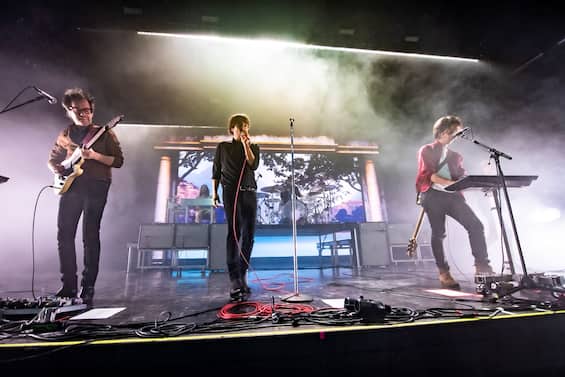 I have memories of Phoenix songs imprinted in my mind, as if I had lived and collected them just a short while ago. But if I look back, when I think about where I was while listening to “If I ever feel better”, I realize that many years have passed. It’s the power of music, which doesn’t make you realize how time goes by inexorably. I am particularly attached to Phoenix’s songs because yes, they marked beautiful moments, but above all they stimulated my curiosity to learn more about French music, so apparently distant from my chords, but so particular and fascinating. Daft Punk, Air, Jean-Michel Jarre “Our Mona Lisa” laughs Thomas when we talk about the very music that they themselves have helped to define over the years, and of which they are an integral part.

“We knew that singing in English would connect us with many people, all over the world”

“When we started, nobody sang in English in France. At the time, if you wanted to be considered and played on the radio, you had to sing in French” – Thomas and Deck tell me – “We faced some obstacles at the beginning of our career, but we knew that in the end here, in Italy, but also in other countries in Europe, or in other parts of the world, there would have been people who would have liked our songs. And so it was. In France, only a few bands, like for example Daft Punk, Air, as you said Jean-Michel Jarre, have bet on this. We grew up with Jarre’s music, we could call it our Mona Lisa: sure, it’s a little different than the original, but for us it’s just like the painting!”

Alpha Zulu, seventh album by Phoenix, recorded at the Louvre

A career that began in 1996, seven albums under his belt, the last of which, “Alpha Zulu”, recorded inside the Louvre museum during the pandemic, in an almost deafening, certainly surreal silence. And when I ask why this choice was made, Deck tells me that “it was a double experience, precisely because it was not only the first time an album was recorded inside the museum, but above all the spaces were completely empty, and we we were the only people there, surrounded by works of art. I think mystical is the adjective that best describes what we experienced!” admits Deck with his seraphic calm. Which is echoed moments later by Thomas, who adds: “We always look for a unique place, which you can transform into something or where you can have a unique experience. “Alpha Zulu” is our seventh album and when we are in the studio, we always do what we can to take our time, to fully enjoy the process of making it, and then also appreciate the preparation for the live. The management of the Louvre contacted us to tell us that there was a space available inside the museum and we immediately seized this wonderful opportunity. A dream come true: when I was seventeen and I was walking in the Tuileries garden and I said to myself: one day I will play in the Louvre! And then it happened. We stayed there for two years, in the midst of the pandemic. Together with us, there were also some ghost friends who kept us company … I will always remember those moments, an unforgettable experience”

I try to imagine what it might mean to record an album inside a museum, during a time when the pandemic had physically pushed us apart, but music had helped us stick together. That of the Phoenix is ​​a very strong union, which has also overcome some moments of artistic questioning (I don’t use the word crisis because, of artistic crisis, there has never been any talk…because there hasn’t been one), canceled by “Ti Amo” , album of 2017, and strengthened by “Alpha Zulu”. Music that they love to make together, and that has helped them create their identity as artists, which we talk about together. Thomas, smiling, tells me: “We try to go as far as possible with our identity, because we know we have a pretty strong DNA in the way we make music, that’s why every album we make it in a different place, we always change location, this time in a museum, last time it was a different place. We change all the tools; we change everything we can change. We grew up together, we have a very strong bond. It’s like a family: when we moved to Paris from Versailles, we all lived together in a very small apartment in a very elegant neighborhood, but it was a tiny house. We didn’t have much money and the rather high prices in our area certainly didn’t help…The great thing is that when we started our first tour and they gave us a tour bus, for us it was great: we had a lot of space at our disposal ! I think our secret is the bond that unites us, and creating music together binds us even more. Doing it yourself would be so boring: we really like to share. Just think that even today, when we’re on tour, we still get rooms together. Sure, our music and we as a band go through ups and downs, but that’s normal. But sharing it with lifelong friends makes it easier.”

The link with Italy

What strikes me more and more as I listen to them is their calmness, their calmness and above all the time they dedicate to answering. And above all that they dedicate themselves to me, without looking at the clock, even though they are preparing for the live, their only one in Italy, a few hours later. The Phoenix are not only very close to each other, but also to our country, also thanks to the creation of some songs in Italian, but not only for this. When we start talking about a “particular proximity” they immediately tell me that “we don’t know the reasons that lead us to love Italy so much. There are realities towards which there is a strong attraction, and so it is for Italy”. Thomas, smiling, tells me: “I got to know Italian musical culture a lot thanks to two Italian guys who are in the band. I got married in Italy, I always have the cards to play Scopa in my pocket! Bronco lives in Rome. And then I admit it: last night I didn’t sleep, just thinking about playing live here…We can say that any excuse is perfect to go back to Italy…these are ties that you can’t explain, but they exist. Something that goes beyond. It’s beautiful!”

Their delicacy in telling me about their passions, their music and the will to continue creating together is of a disarming beauty. Like their simplicity in admitting that they started playing together because it was something they loved to do. And it will always stay that way. It’s not easy, especially after so many years together. But their genius is indescribable. Like, indeed, their simplicity. And perhaps the secret of their artistic union is right there. At the end of our interview I ask: do you have a dream? And Deck says to me: “Yes, stay free. Free to make the music we love. That’s what we want.” I greet them and thank them for the time we spent together. And Thomas tells me: “Thank you, it was emotional”. It was for me too, yes.