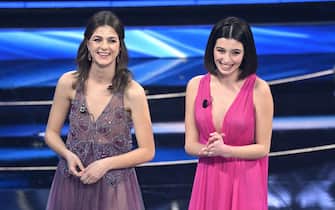 Among the many guests who walked the stage of the Ariston yesterday evening, Wednesday 2 February, also the young actresses Gaia Girace And Margherita Mazzucco. To them the thrill (and fear) of going down the much-loved stairs of the Festival.

WATCH THE VIDEO: Sanremo 2022, 5 best moments of the second evening

The two girls arrived alongside Amadeus to present the new and third season of the successful series “The brilliant friend”Based on the novels of Elena Ferrante.

The brilliant friend 3, the trailer for the new season

In perfectly coordinated clothes, Gaia Girace and Margherita Mazzucco said that the third season of the series will air starting from the next Sunday 6th Februaryon the main national network.

Sanremo 2022, the most beautiful dresses of the second evening. PHOTO

The two girls, who then dedicated themselves to the presentation of the ninth singer in the competition, Fabrizio Moro, arrive for the second time at the Ligurian festivalafter having presented some artists in the 2020 edition, always alongside Amadeus.

The brilliant friend 3: release, cast and plot of the new season

Margherita Mazzucco she wore a very elegant dress in purple tones and studded with glitter, signed by Giorgio Armani. For her, hair gathered in a very sweet half-ponytail.

WATCH THE VIDEO: Sanremo 2022, the ranking after the second evening

The co-star of “The brilliant friend” Gaia Girace instead he chose to tread the Ariston stage in a very elegant and lively Valentino dress. A helmet for her.

Sanremo 2022, waiting for the lineup of the third evening here are guests and singers

As also told on the occasion of the recent photocall for the presentation of “The brilliant friend 3”, Raffaella Lila (Girace) and Elena Lenù (Mazzucco) have now grown up and find themselves, on the threshold of thirty years, living the Italian 70s from different cities and perspectives. While Elena will opt for an intellectual career, Raffaella will become a skilled worker.

The brilliant friend 3, shooting in Florence is underway. PHOTO

The common experience, however, will be that of the cultural and social upheavals of those years, with the student and worker movement at the forefront of fighting the great battles for civil and social rights that led to the enormous regulatory breakthroughs of that decade.

“The brilliant friend 3 – Story of those who flee and those who remain”Will be for Margherita Mazzucco and Gaia Girace the last season as in the rest of the series Lila and Lenù will be mature women, played by adult actresses.

Margherita Mazzucco, who is the actress who plays Elena in The brilliant friend

Barely 18, Gaia Girace And Margherita Mazzucco in fact, they are born in 2003, the two Italian penthouses have achieved worldwide success in a very short time, thanks also to being broadcast overseas with HBO. Great emotion that the two young women also wanted to tell Amadeus on the stage of the Ariston.

Gaia Girace, who is the actress who plays Lila in The brilliant friend