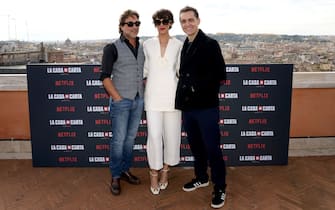 Pedro Alonso, Enrique Arce and Belén Cuesta gave themselves to fans and journalists at a party in Ponte Milvio.

WATCH THE VIDEO: La Casa di Carta 5, the featurette of the finale

The House of Paper 5, part 2: the trailer for the final season

For the occasion, Ponte Milvio was dyed red and numerous figures appeared dressed in red overalls and the inevitable Dali mask on their faces. In the background the soundtrack of the series, but also “Bella Ciao”, which has now become a symbol of the Spanish series.

La Casa di Carta 5, the ending: when the second part comes out

Crowd of fans under the Torretta Valadier to welcome the three Spanish actors.

“If we catch it?”, The slogan of the video that relaunched the appointment.

The best TV series to see in November 2021. PHOTOS

Belén Cuesta, Pedro Alonso and Enrique Arce did not spare themselves on photos and autographs with fans.

La Casa di Carta 5, the review of the first part of the final season

The second and final part of the fifth season of La Casa di Carta will be released on December 3 on Netflix.

“This moment is bittersweet – comments Arce – on the one hand it gives us actors freedom and a return to anonymity, on the other it closes an incredible period”.

And on the finale: “It will strike straight to the heart – comments Pedro Alonso – with a very different style from the amazing and scenographic opening of the season, which aimed to amaze. Creator Alex Pina rewrote the closing scene several times, but we only shot one version of it. ”