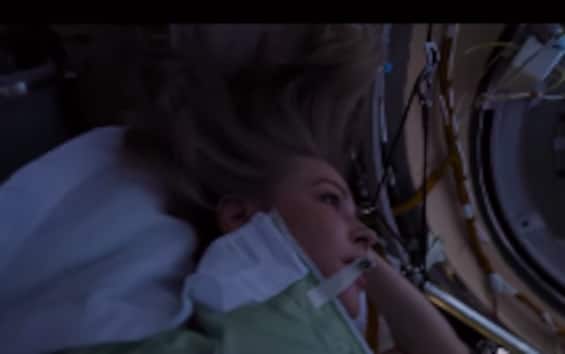 A space odyssey but for real. The Challenge is the gauntlet that the country’s cinema of Klim Shipenko launches today, at the dawn of another great challenge that Moscow seems ready to take on with the Western world and in particular the United States. A film shot at least largely far away from our planet, in that space that has always frightened and fascinated at the same time especially at those latitudes.

The trailer at least partially restores the charm of this ambitious operation which, as the international title suggests, is truly a full-blown challenge. A dream that began on October 5, 2021, when a Soyuz (the Russian shuttle) left for the International Space Station. On board the vehicle were director Klim Shipenko, the lead actress Yulia Peresild and the cosmonaut Anton Shkaplerov. In the end, shooting lasted twelve days, with Shipenko handling more or less everything concerning the strictly “filmic” aspect of the enterprise (including make-up). On the station, to assist him, there was also a large crew of experts made up of Thomas Pesquet (ESA), Mark Vande Hei, Shane Kimbrough and Megan McArthur (NASA), without forgetting Aki Hoshide (JAXA) and the cosmonauts Oleg Novitsky and Peter Dubrov. The latter two were part Of Roscosmosthe Russian space agency that collaborated on the film.

The important deployment of forces led to a total of 30 hours of filming in space. A real treasure that was well exploited by Shipenko. In fact, the film survives 30-40 minutes recorded far from the Earth, which give further charm to a story that revives the special bond between Russian cinema and space (think of a masterpiece like Solaris by Andrei Tarkovsky). The Challenge tells the story of an open heart operation to be performed “in zero gravity”. A task that will be entrusted to the heart surgeon Zhenya Belyaeva, who in the trailer we see juggling his heroic mission. To interpret her role, the protagonist Yulia Peresild had to undergo hard training, which brought her a hard physical and mental stress which she does not regret today: “We worked hard all the time. Despite our cheerful disposition and smiles, we got very tired. If they brought it back to me, obviously I would arrive more prepared. But I would do it anyway.” Shipenko went into more detail, explaining what training he and his actress were forced to do to get ready for the challenge with space: “We underwent an accelerated course including many important elements that cosmonauts study over several years . We attempted to assimilate them in four months. Obviously it is a very short time. We have done theoretical, practical, endurance, sports… everything imaginable. It seemed like a quite feasible challenge, of course it’s not enough to become a cosmonaut at the level of Anton and other professionals, but it was enough to get ready to participate in a space flight.” The film is produced by Channel One, the most important Russian broadcaster, and also has a certain importance that goes beyond the cinematographic discourse. The release of the trailer is in fact to certify a small great geopolitical victory for the country that has thus beaten its all-time rivals, the Americans, to the punch. The movie of Doug Liman starring Tom Cruise it will perhaps be better than the competitor but at this point it will still come second in the race for the “first film shot in space”. Rather than focus on these skirmishes, however, it is probably better to gloss over the race, reminding us that The Challenge in its own way it once again represents “a small step for man and a giant leap for humanity”, all without distinction.