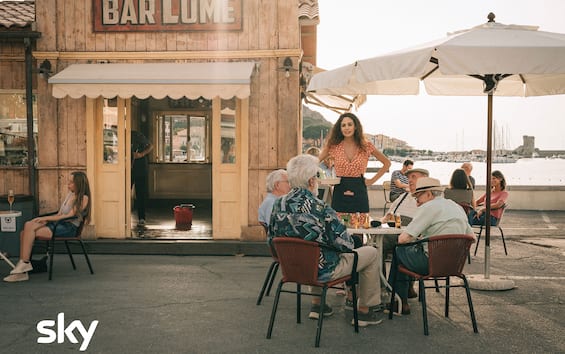 Il Barlume is like Sanremo: nobody would mention it during a dinner on the page so as not to seem provincial (better to pretend to follow The Last of Us, Copenhagen Cowboys or Call My Agent, it’s cooler) but everyone watches it. It is much more than a “guilty pleasure”: it is a fixed viewing appointment that has been going on for ten years now and which this year almost doubles: there are three stories instead of two and the third, And then zumba!is directed for the first time by a woman: Milena Cocozza.

On a well-known and therefore reassuring plot, which mixes in an original and even daring way, the Ellery Queen-like mystery plots with the village atmospheres in the “vernacoliere” style, however, spurious and striking elements are grafted: like the LGBT subplot that involves Fusco and her torrid same-sex relationship, displayed in glossy lesbo-chic flashes. On the other hand, at the antipodes, the “family” subplot survives which concerns Stefano Fresi’s Beppe Battaglia, who became an extremely anxious, even paranoid, father of Tizi’s second daughter: little Marina. However, given that even the most ordinary and prosaic affairs in Pineta are always characterized by something humorously strident, the merry new family is twice “enlarged”: she has little Ampelino in her bosom, the fruit, as you will recall, of a previous union with Maximum; her and is a guest of the pedantic Pasquali, who in the meantime has become a very zealous mayor.

The Veneto insurer, now mayor of Pineta, wants to introduce a very rigorous version of separate waste collection based on the presence of 16 garbage bins, with the intention of following the model of a Finnish town where 99 is very virtuously 7% recycled! And the fact is not irrelevant because, in the crime of the day, some ecological operators probably also have something to do with it…

We won’t say much more, for obvious reasons; it suffices to know that in this episode several subplots follow one another, while comedy intertwines and mystery tensions intertwine as usual. We have a Colombian instructor giving zumba lessons to the best seniors in the beach town; Beppe Battaglia besieged by the typical fears of the new father, raised to the nth degree of paranoid power; Massimo Viviani ensnared by a woman as careless as she is fiery and Fusco distracted by the pains of lost love.

As you know, after ten years, they are all expedients to make the very different chords of the comedy of its interpreters resonate, each one the expression of a singular figure, from whose mix the unique cocktail of this bizarre inimitable project is born

Yes, because one of the trump cards of this series, and of its healthy longevity, is probably the mix, impossible on paper, of the comic registers of its performers, which manages to satisfy the tastes of the most diverse palates: Massimo’s clumsy awkwardness, which rests but on the robust shoulders of a highly esteemed theater actor like Filippo Timi; the good-natured Romanesque del Beppe by Stefano Fresi, who is one of the most popular actors of the Italian star system (in 2022 alone he took part in 6 films!); the ancient Florentine irony of Alessandro Benvenuti, who embodies the tradition of the 70s cabaret of the “Giancatti”; the irresistible Venetian slang invented by Corrado Guzzanti, who has recently decided to get back into the game by partially disconnecting himself from the satirical masks of his previous television phase (in these weeks he is present in two very trendy series, in addition to this one, such as I’m Lillo And Call my agent – ​​Italy).

And again: the interior minister Tassone (perhaps inspired by the honorable Razzi, due to his lack of familiarity with grammar) played by Michele Di Mauro, who exactly like the Roman Guzzanti disengages more than excellently by reciting in a dialect not his own: he is from Turin but is expressed in a very credible, albeit caricatured Sicilian from Enna. Or the barman Marchino played by Paolo Cioni, who damn resembles another famous Cioni: Mario, the surreal character with whom Roberto Benigni’s genius emerged in the mid-70s. Not to mention the three old men, the “children”, who are perhaps the ones who best preserve the legacy of Malvaldi’s books from where it all began.

And then there are the new entries that allow you to add new spices to a tried and tested recipe, such as the Bettina (already seen in Guess who?), entrusted to the very effective masquerade inspiration of Jerryann Desaya Johara Liguori, capable of finally giving Massimo a sexual life after years of unbearable abstinence. And the “revenant” Barbara Enrichi, who was all the rage in the comedy cinema of the 90s by Pieraccioni and its surroundings, and who returns today with a blond bob in a role that is anything but secondary.

In short, the usual funny elegy of the serene air of the Italian province (Tuscany, better: Pisa, with some significant Livorno influence), in which there is a paroxysmal accretion of crimes in relation to its tiny surface; but they are hyper-realistic nasty things that after all do not hurt, a bit like the falls of Willy the Coyote in the cartoons Looney Tunes.

Because this is clear, isn’t it? Anyone wishing to find verisimilitude would look for it in vain here. In the Barlume there is more: a bit of rose water chills and a lot of garrulous bonhomie, a pinch of yellow and what remains of the Italian comedy. And in this episode, to tell the heterogeneous mix of styles and inspirations, there is also a rap number, as if we were in an American musical. Not only that: in a standing ovation sequence in which the comic genius of the Guzzanti-Fresi duo shines, the condition of paranoia which in certain situations assails the consumer of tetrahydrocannabinol (the active ingredient of cannabis) is even represented!

There is all this and even more inside the Barlume. That’s why we always come back willingly, for ten years now; to get passionate about his lambasted cases of crime news, told with the same shameless emphasis of a title of the “Tirreno”; and to smile at the inadequacy of his characters, who are basically so similar to ours.

Ah, don’t turn off (as they would say in Pineta) the TV on the end credits; you would risk losing the theme song composed and performed by Gatti Mézzi, The Viviani del BarLumea beautiful cacciucco swingaccio, indeed: very ganzi.