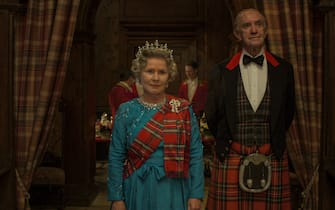 Close to the 40th anniversary of his accession to the throne there Queen Elizabeth II (Imelda Staunton) reflects on the reign that included nine prime ministers, the advent of television for the masses, and the decline of the British Empire. However, new challenges are emerging on the horizon. The collapse of the Soviet Union and the transfer of Hong Kong sovereignty signal a radical change in the international order and present challenges and opportunities to the Monarchy, with new problems emerging even not far from home.

The Crown 6, the first photo of Princess Diana with William and Harry

The Prince Charles (Dominic West) prompts the mother to agree to divorce with Diana (Elizabeth Debicki), thus laying the foundations for a constitutional crisis of the Monarchy. The increasingly separated life between husband and wife fuels numerous gossip and, as media scrutiny intensifies, Diana takes control of the situation and breaks family rules by publishing a book exposing the differences within the House of Windsor and threatening the support of Carlo from the public opinion

The Crown 5, the TV series will arrive on November 9th

Tensions rise when he enters the scene Mohamed Al Fayed (Salim Daw) who, driven by the desire to be accepted by the nobility, takes advantage of the wealth and power he has earned on his own to get a seat at the royal table for him and his son Dodi (Khalid Abdalla)

The Crown, the images of Elizabeth Debicki as Lady Diana

Journalists, biographers and historians have documented the challenges faced by the royal family in the 1990s. “That’s the amazing thing about playing these people right now, because in the journey of The Crown, of all seasons, the fifth is the most visually faithful content we have of the Royal Family. In the nineties everything started to be filmed, even with the birth of news channels active 24 hours a day, so there is just this incredible amount of content that we have access to “he explained. Elizabeth Debicki

The Crown returns to Netflix’s top 10

The Crown 6, filming interrupted after the queen’s death?

“I think people understand, with the cast changing every two seasons, that this is not an imitation. This is the evocation of a character, “explained Dominic West

Farewell to the Queen, from The Queen to The Crown: movies and TV series

Imelda Staunton hopes, just like Queen Elizabeth’s character, that she has done her duty to the audience: “The great thing, and I hope not to prove them wrong, is that people have said, ‘I can’t wait to see her play Queen’. So, let’s just hope she works for them, because I’ve done it by now. I can’t do anything about it now! ”

The Crown, Netflix is ​​thinking of a prequel