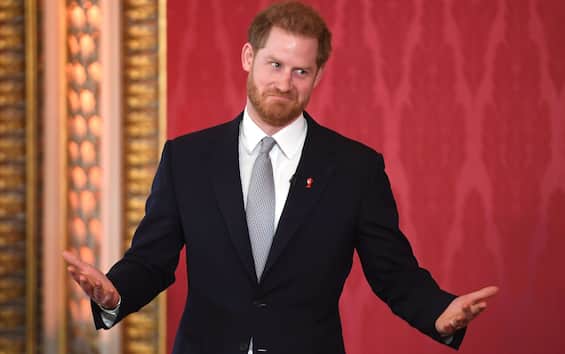 Harry of England is the man of the moment, not only the sales of Shootthe biographical book available worldwide from 10 January, but also the massive media presence of the thirty-eight year old personally involved in volume promotion even on the small screen. In his most recent television appearance, the Duke of Sussex, a guest of the drawing room of Late Show by Stephen Colbert he joked with the conductor about The Crowntv series of which he is one special viewer since, it is clear, for him the narration is above all a matter of fact–checking.

Prince Harry jokes, probably to push away the inevitable tension of weeks in which it is the subject of discussions around the world, or at least of that part of the planet, made up of experts, enthusiasts and simply curious, which is interested in real affairs and which is living with fibrillation the release of the book in in which Carlo’s second son gets naked as he had never done before.
The interview with Stephen Colbert is lighter than those released and broadcast on the eve of the publication of Shoot: now that the volume is in everyone’s hands, all that remains is comment on interpretations Of what is writtenit being understood that the prince invites the spectatorsia inquire through reading, since, whatever the version of the newspapers, nothing can be truer than his words, verifiable by any reader at any time. Harry is very attentive to the truth which is the manifest guiding principle of the whole operation Shoot, a book which, as is known, he felt the urgency to publish to tell firsthand what happened in his life, a version which, according to his intentions, would sweep away any other interpretation and narration made in the last thirty years. By the same token, when the conversation between him and Colbert turns on The Crownthe prince admits that yes, watched the tv series Netflix but did it with the critical eye of someone who was a real interpreter of the facts told on the screen.

Harry and his relationship with memories Shoot

In the interview Harry of England mimics the pose of someone watching TV and write everything down in a notebookor, image that made the audience laugh and him first. In truth, the reading of Shoot reveals more in-depth details about the prince’s relationship with his past history and right in the opening pages he dwells on the matter of memories.
Shootwhich is a memoirfor obvious reasons prompts Harry to rewind the tape of his life to childhood but the Duke of Sussex candidly admits that in its memory processes something it broke with the death of his mother. Since that tragic event, he has been unable to place the events perfectly in their chronological order and is inclined rather – perhaps also because of his military background, he says – to place the things that happened based on the place in which they happened. “Why does my memory organize experiences in this way? (…) Maybe the soldier in me evaluates every space as a potential battlefield,” he reads Shoota statement which, however, does not detract from the truthfulness of the “so-called objective facts”, those for which Harry is now fighting.

The Crown: the reactions of the royal family

The fact that Harry has publicly admitted that he is a spectator of The Crown is something completely new since, given the sensitive nature of the contents of Peter Morgan’s show, much has been said about the reactions and judgments, always presumed, reported and never official, of the Windsor against the series.

English newspapers have reported, over the years, the growing disappointment by several members of the royal family against the show which claims to provide a real version of the facts only because it is inspired by existing or existing characters. What if William he would express his disinterest towards The Crown, different would have been the attitude of the deceased Queen who would have been a spectator. Also Carlo it was said shocked at how he was portrayed on the showreported Anas Sarwar, Scottish politician, who said he heard the current king distance himself in front of a group of parliamentarians from Charles of The Crown at an event in Scotland in 2021. Sarah Ferguson, on the other hand, spoke about The Crown about the recent accusation that she only collaborated on the production as a consultant because she had previously been placed among fans of the show. Beyond the positions taken, real or presumed, Prince Harry underlined throughout the interview how easy it is to believe what the media report, which is why, even to refute what is narrated in The Crownhe is committed to writing his truth.