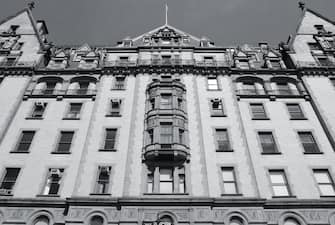 The Dakota Building (The Dakota) is one of the most famous buildings in New York. It is located on the Upper West Side of Manhattan. It is considered a real monument of the show, for many reasons. First of all because it has always been chosen by movie and music stars, who compete to live here. However, it is not that easy: a committee formed by the tenants of the Dakota decides who can go and live there and who cannot. Many stars have been rejected, for example it seems they have been left out the door Melanie Griffith and Antonio Banderas, among others

The Dakota Building is considered a monument of the spectacle also because many films have chosen it as a scenario. Several US films show this building in the background or even in the foreground. Whose film to which the Dakota’s cinematic fame is most linked? “Rosemary’s Baby” (1968) by Roman Polanski

Apartment 7A, the film will be a prequel to Rosemary’s Baby

Here is a scene from the movie “Rosemary’s Baby” where we see the protagonist, Mia Farrow, holding a copy of Time with the words “Is God Dead?”. That cover really came out in Time in 1968 but it is even more significant based on the plot of the film: this film in fact talks about the birth of the antichrist. “Rosemary’s Baby” is one of the first A-series films (with famous actors and sizable budgets) in the horror genre. And one of the first to clear a theme that had hitherto been taboo: that of Satanism, in fact

Mia Farrow in one of the highlights of “Rosemary’s Baby”. Here it is towards the end of the film, when she will approach the black satanic cradle to see her son. Her son her son is the son of Satan, as the woman was impregnated without her knowledge by the devil, to whom her womb was delivered by her husband Guy in exchange for success in Hollywood

This frame that shows Mia Farrow-Rosemary’s devastating and devastating reaction when she sees her child in the crib is something that enters the unconscious. Farrow’s skill in this film is unspeakable. But the director, Roman Polanski, did not want her as the protagonist: for him Rosemary had to be her wife, the actress Sharon Tate

Allen v. Farrow, the HBO docu-series on the accusations of harassment of the director

Here is the Dakota in one of the panoramic sequences of “Rosemary’s Baby” with an aerial view of the eerie Gothic spiers. In the diegesis of the film, the Dakota is called Bramford, exactly as in the novel of the same name from which the film is based: the bestseller by Ira Levin

Sharon Tate, as we all know, did not play Rosemary. Roman Polanski wanted him strongly, but Paramount forced Mia Farrow (who was then the very young bride of an elderly Frank Sinatra, so because of the scandal created she was always on the front pages of the newspapers). Here we see Sharon Tate in the poster of another husband film of her (although at the time of this title the two were not yet married): “Please don’t bite me on the neck!” of 1967. Director and actress married at the end of that year

Sharon Tate, photos of the actress killed by Charles Manson

A scene from the movie “Please don’t bite me on the neck!” directed by Roman Polanski with Sharon Tate in the cast

Sharon Tate and Roman Polanski: Love and Death in Hollywood

In this scene from the movie “Please don’t bite me on the neck!” we see Sharon Tate in the bathtub together with Roman Polanski himself: the director also starred in the film, in the role of Alfred the assistant

Video Sharon Tate and the massacre of Cielo Drive

Charles Manson ends up on the cover of Life on December 19, 1969. The American serial killer was the silk guru called Family. On August 9, 1969, Manson sent some of his followers to the mansion on Cielo Drive, Los Angeles, to massacre Sharon Tate (pregnant in the eighth and a half months of pregnancy) and other guests present in the house. Roman Polanski was saved: the director was in London looking for a location for a film

The sect, the murders, the prison: who was Charles Manson. PHOTO

Judy Garland as Dorothy in The Wizard of Oz. Judy Garland is also the great protagonist of the essay “The curse of the Dakota” by Camilla Sernagiotto. For many reasons, including the main one: she lived in the Dakota building. But not only…

Other great protagonists of Sernagiotto’s essay are the Beatles. Not just John Lennon but the whole English group in general. A fulcrum of the essay on the Dakota is Aleister Crowley, the famous esotericist who inspired so many Satanists. Crowley’s figure is highly regarded by music and movie stars, from Led Zeppelin to the Beatles. On the cover of the album “Sgt. Pepper’s Lonely Hearts Club Band “appears among the Beatles idols: he is second from the left, in the top row

Here is the entrance to the Dakota building, the one where John Lennon was killed on December 8, 1980. The former Beatles singer, who lived here with Yoko Ono and his son Sean, was shot five times by psychotic fan Mark David Chapman

Throughout the story that is told and analyzed in the essay “The Curse of the Dakota,” every fact of blood seems to have been inspired by works of pop culture: Charle Manson said that it was the Beatles’ White Album that inspired him to kill. Chapman confesses that inspiration came from JD Salinger’s book The Young Holden. At the time of John Lennon’s murder, in addition to the revolver, he is holding the book. After shooting, he will remain at the crime scene reading “The Young Holden”

“The curse of the Dakota” by Camilla Sernagiotto reveals for the first time that – although it was the Beatles’ White Album that entered the trial of the murder of Roman Polanski’s wife – in reality perhaps it was not that record that inspired the delirium murderous but another famous “monument” of the show: the Dakota. In the photo: the author Camilla Sernagiotto with the book published for Arcana Edizioni

“The curse of the Dakota” by Camilla Sernagiotto, published by Arcana Edizioni