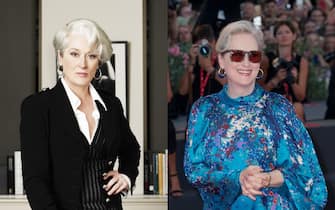 Anne Hathaway: Andrea “Andy” Sachs. With this film, Anne Hathaway made herself known to the general public. Since then she has collected such successful films as “Love & Other Remedies” (2010), “Alice in Wonderland” (2010), “The Dark Knight Returns” (2012) and “Interstellar” (2014). Thanks to the 2008 film “Rachel Is Getting Married” she received her first Oscar nomination for Best Actress. Her Oscar which she won in 2013 in the Best Supporting Actress category for “Les Misérables”.

Emily Blunt: Emily Charlton. Also for Emily Blunt “The devil wears Prada” was a springboard, which also earned her a Gloden Globe nomination, in the best supporting actress section. Emily received four other Golden Globe nominations for her roles in “The Young Victoria”, “The Fisherman of Dreams”, “Into the Woods” and “Mary Poppins Returns”.

Did Emily Blunt turn down the role of Black Widow? The words of the actress

Stanley Tucci: Nigel. The actor continued an important career: in 2010 he was nominated for an Oscar for Best Supporting Actor for the film “Amabili Remains”.

Adrian Grenier: Nate. After “The devil wears Prada” the actor appeared in several films, without however replicating the popularity of Frankel’s film. In addition to his acting career, Grenier plays guitar, horn and piano and is a member of the New York band The Honey Brothers.

Simon Baker: Christian Thompson. From 2008 until 2015 Simon Baker played Patrick Jane, star of the television series “The Mentalist,” for which he earned a Golden Globes, Emmy and Screen Actors Guild nomination.

10 curiosities about The Devil wears Prada

Tracie Thoms: Lily. In the film she played Lily, a friend of Andy’s. The actress has appeared in other films and especially in TV series such as “Grey’s Anatomy”, “Cold Case” and “Lincoln Rhyme – Hunt for the Bone Collector”.

Rich Sommer: Doug. The actor has mostly appeared in television series such as “Without a Trace”, “Ugly Betty” and “Mad Men”.

Mad Men: how they were yesterday and how they are today. PHOTO

Daniel Sunjata: James Holt. The actor worked in the seventh and eighth seasons of Grey’s Anatomy, playing the role of nurse Eli. From 2013 to 2015 he took part in the television series Graceland in which he plays Paul Briggs, an FBI agent.

David Marshall Grant: Richard Sachs. The actor continued to work primarily as a screenwriter and producer.