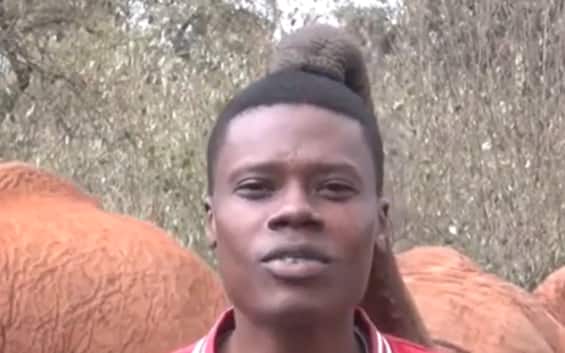 Nice curtain during the recording of a feature film on drought in Africa. Journalist Alvin Kaunda who works for Kenya Broadcasting Corporation (KBC) is recording a “stand up” (a direct feint in journalistic jargon) among three baby elephants at the Sheldrick Wildlife Trust in Nairobi, the pachyderm orphanage in Kenya. While he talks about the human impact on the environment he is surrounded by these puppies who try to steal the show by disturbing him during his work. The young man tries to resist, up to a certain point, then he can’t. One of these baby elephants first rests its trunk on the anchorman’s ear, then on his head, passing through his face. It’s at that point that Kaunda can’t help herself and bursts out laughing. The direct fake has to be redone, but the video goes on social networks, giving endless smiles on the web.

The proboscis in the face

In the 45-second video, the journalist is seen among three baby elephants. One to the left of the young man eats the shrubs undisturbed, the other to the right of him pushes the journalist with his tonnage who tries to stop him by extending his hand on the animal’s back, while the third elephant steals the limelight from him. Curious at first, he swipes his proboscis over the man’s ear, then passes it over the nape of his neck to end up on his face. At that point Kaunda stops talking and bursts out laughing. “At first I felt the contact with the elephant’s trunk on my back, but I decided to go ahead because I was doing the tenth take of my piece on camera,” the Kenyan journalist told Storyfull. “I wasn’t going to let anything stop me. Until the baby elephant stuck its trunk in my mouth” .