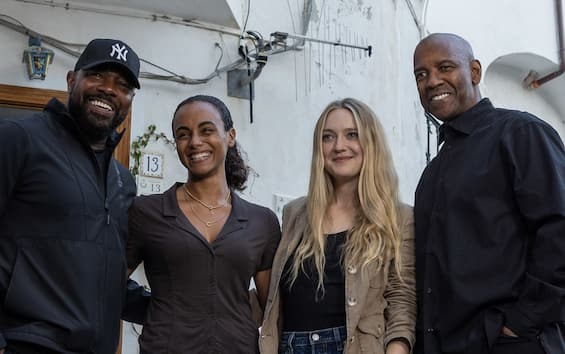 Antoine Fuqua returns to directing of the new adventure of Robert McCall, the former intelligence agent played by Denzel Washington. Inspired by the TV series of the 80s The Equalizer this character has changed his life and has a new identity with which he has started a normal job and leads a quiet life. But how long will it last?

The Equalizer 3 in Italy

The photos that have been posted on the web show theactor on the Amalfi Coastin particular in the municipality of Atrani, in the company of colleagues Dakota Fanning and Gaia Scodellaro who are part of the cast of the film. Washington has previously worked with Fanning in Man on Fire, while Scodellaro is a 1985 Neapolitan actress with a Neapolitan father and an American mother. The three were immortalized in Via Francesco Maria Pansa ad Atrani in a break from filming that for the next few days will continue in some streets of the municipalities of Maiori and Minori.

McCall tries to stay out of trouble, but his manic and precise personality could once again put him in the middle of the action. He cares about the people around him and if he witnesses violence or abuse of any kind he cannot turn away. So also in this film probably it will intervene in defense of the weakest with intelligence and strength, even if the official plot is still unclear. The film is scheduled for release on September 1, 2023 and it will certainly continue the horizontal narrative arc followed in the first two films.

The cast of The Equalizer

Fuqua goes back behind the camera for The Equalizer 3, while Richard Wenk signs the script. In addition to Washington, Fanning and Scodellaro, the cast also includes Melissa Leo, Bill Pullman, Pedro Pascal, Jay Hieron, Sakina Jaffrey, Caroline Day, Miguel Nascimento, Gabrielle Lorthe, Ashton Sanders, Jonathan Scarfe, Tamara Hickey, Liam McNeill and Adam Karst . A cast full of high-sounding names that suggest an engaging and exciting adventure against the backdrop of a fascinating and magical area of ​​our country that will surely offer a suggestive photograph.