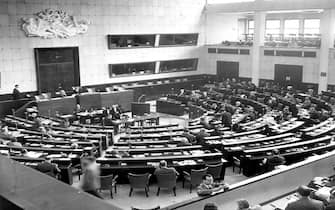 The Plenary of the Eurochamber celebrated its own meetings on 22 November 70 years old. The first session of what was at the time the Czech Parliamentary Assembly (European Community of Coal and Steel) took place, in fact, in 1952. At the time it was made up of 78 representatives, all appointed within the national parliaments of those who were 6 Member States. Hence the birth of the European Parliament as we know it today

It is about the only one institution of the EU elected directly by the citizens and which guarantees the democratic legitimacy of the Union. It has a number of determining functions such as adopting or rejecting the directive proposals. But it wasn’t always like this. Before the direct elections to the European Parliament, which took place for the first time in 1979the predecessor of today’s Parliament only had a supervisory role

READ ALSO – Abortion, the European Parliament calls for it to be included in the Charter of Fundamental Rights

Between 1952 and 1958 the Assembly was presided over by political exponents such as the former Belgian premier Paul-Henri Spaak, the former presidents of the Council Alcide De Gasperi (pictured) and Giuseppe Pella and the German Hans Furler

The first direct electionsas mentioned, were held between 7 and 10 June 1979. In the Assembly, among other things, the number of MPs present had already increased, rising to 198 after the accession of Denmark, Ireland and United Kingdom which took place in 1973. The number of deputies then increased again with the successive enlargements

After German unificationin fact, it was decided to adapt the composition of the European Parliament to demographic evolution. Over the decades it has gone from 6 founding countries to the 27 member states of today and come on 78 national representatives from 1952 to the present 705 deputies elected by direct universal suffrage (there were 751 before Brexit)

The powers of the Eurochamber have evolved over the years. The Treaty of Maastricht of 1992 (photo), for example, introduced the co-decision procedure for a limited number of legislative sectors. The treaty of Lisbon of 2007, however, widened the scope of application of the co-decision procedure, which today covers areas such as the common agricultural policy, the economy, justice and security

A stage considered important in the history of this institution is that of the 2014 elections, a circumstance in which the political groups presented the “Spitzenkandidaten” or “leading candidates”) for the position of President of the Commission. This system was promoted to make the choice of the President of the Commission more transparent, which until then was only indicated by the Member States. Jean-Claude Juncker (photo), elected in 2014, was the “leading candidate” of the European People’s Party (EPP).

As a directly elected transnational, multilingual, multi-party parliament, the European Parliament today plays an important role as a forum for political debate and decision-making, with legislative and budgetary powers affecting millions of citizens of the European Union

“In 70 years the assembly has grown and strengthened going from a consultative body with limited powers to a real institution capable of embracing the democracy and the expression of European public opinion”, underlined during the September plenary session the President of the European Parliament Roberta metsolain office since 18 January 2022

READ ALSO – Europe Day: what it is and why it is celebrated on 9 May