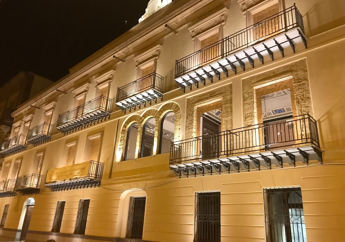 “We have returned to Cassaro the prospectus of the former ministries building in Palermo. Within a few years the building will be reopened and will be the seat of the library and newspaper library of the Sicilian Regional Assembly, formerly named after Piersanti Mattarella”. This evening was said by the President of the Sicilian Regional Assembly, Gianfranco Miccichè, who participated, with the secretary general of Ars Fabrizio Scimè and the President of the Federico Secondo Patrizia Monterosso Foundation, in the inauguration of the illuminated façade of the building. The property was purchased in order to house the bibliographic and documentary heritage of the Sicilian Regional Assembly. The ancient building is of considerable historical and artistic interest, above all for the variety of architectural and decorative elements that have survived to document the transformations that took place from the nineteenth century to today.


The building was originally owned by Cannizzaro, President of the patrimony (1615), then by Baron Antonino Agliata, judge of the Grand Court, but took the name of “Palazzo del Principe della Catena” when in 1788 it became the property of Antonino Reggio, Prince of the Chain, originally from Aci Catena and owner of several fiefdoms both in Palermo and Catania. Subsequently property of the Ministry and Royal Secretariat of State for Sicily in 1850 then Royal Prefecture of Palermo from 1783 to 1931. The Sicilian Regional Assembly bought it from the Regional Province of Palermo on February 5, 1986, President of the Sicilian Regional Assembly was the dr. Salvatore Lauricella while the President of the Province of Palermo was dr. Girolamo Di Benedetto.

The history of the building called “Ex Ministeri” starting from 1811 is closely intertwined with that of the institutions that represented the government of Sicily and is therefore also the history of the changes that, from that date until the end of the Second World War, determined the change of political course. In particular, the palace stands on the northwest side of today’s Piazza della Vittoria, as the large floor that extended in front of the Royal Palace, seat of power in every era, on Corso Vittorio Emanuele, the ancient Vicus Marmoreus, axis central street of the city, extended and renamed via Toledo in 1564.

The Palace is now called “Palazzo Ex Ministeri” and owes its name to having been, during the Bourbon Kingdom, the seat of the Lieutenant General of the Kingdom, of the Royal Secretariat and of the Ministries of State with Real Dispaccio of 30 July 1811, in fact , King Ferdinand of Bourbon ordered the Real Patrimonio Tribunal to purchase the palace of the Prince of the Catena to aggregate it to the district of S. Giacomo. Some historians hypothesize that this aggregation was dictated by the need to expand the premises of the hospital in the San Giacomo quarter, a Spanish contingent. The last re-adaptation works, which constituted one of the last interventions that determined the current configuration of the building, were the work of the architect Carlo Giachery. In 1850 the architect Carlo Giachery was commissioned “by public vote by the sovereign command” to enlarge and modify the building of the State Ministries.

The transformation and expansion works, which continued until 1853, largely changed the original planimetric conformation and the appearance of the building as other buildings of smaller dimensions existing in the building between it and the Hospital of S. Giacomo which originally had two floors. In addition to these interventions, the architect was required to have a solution of vertical connection with the last elevation of the adjacent San Giacomo Hospital. A secondary function, therefore, to fulfill which complex geometries or particular finishes were not necessary, since even a staircase with a rectangular or square plan, and perhaps simply plastered, would have been sufficient. Giachery chooses instead to create a masterpiece of stereotomy, providing tangible proof of his theoretical knowledge on stone cutting.

The fully cantilevered staircase winds concentrically inside a high drum on which a spherical dome is set. The dome ends with a circular eye covered by an iron and glass skylight. From 1819 to 1860 the building also housed the Office of the Intendant, a figure similar to the current Prefect and, moreover, the seat of the Consultative Chamber of Commerce of Palermo. In 1885 the building became the seat of the Prefecture and the Prefect’s lodging. From 1931 the offices of the Scholastic Superintendency, the ONMI, the Balilla National Opera and the quarters of the Quaestor and the Provveditore also found accommodation in the building in Piazza della Vittoria. Damaged by the earthquake of January 1968, the Palazzo dei Ministeri was cleared of the offices of the Superintendent of Studies and the building remained abandoned for about twenty years. In 1993 the consolidation works of the foundations were carried out and for this purpose archaeological tests were carried out bringing to light traces of wells dating back to the Middle Ages as well as traces relating to the seventeenth-century plant. The safety project provided for the replacement of the roof floors and two floors inside the first and second deck as well as the seismic improvement and the integral restoration of the elevations and the lighting of the same, which presented an accentuated deterioration in correspondence with the plasters, decorative facings such as frames and moldings, stone elements, bricks, balcony shelves, metal elements and fixtures. During the restoration phase, five balconies with sandstone frames and a loggia with three contiguous openings relating to a previous building presumably from the 15th century were found on the first floor.