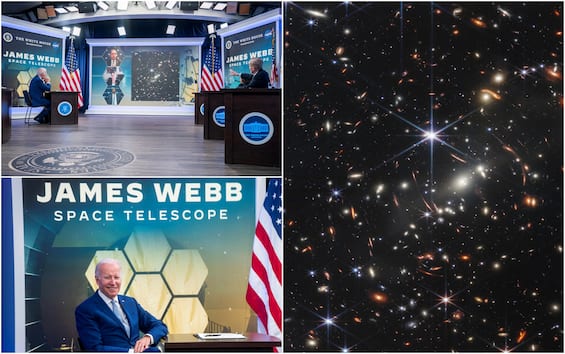 “It’s a historic day”. With these words Joe Biden unveiled the first image taken by the James Webb telescope. Images that are a “first taste”, which show that “America can do great things,” said the US president. Next to him, NASA chief Bill Nelson and Vice President Kamala Harris.

“Galaxies that shine alongside other galaxies”

Nelson, explaining to Biden the first image taken by Webb, spoke of “galaxies that shine next to other galaxies. A small portion of the universe.” With this telescope, he added, we will be able “to answer questions that do not yet we still know how to formulate. “” I am honored to be here with you. Today opens a new chapter in space exploration, “commented Harris. After the presentation, Biden tweeted:” The first image from the Webb telescope represents a historic moment for science and technology, astronomy and space exploration. But also for America and all humanity “.

The star of the first image of the Webb telescope is the SMACS 0723 galaxy cluster. The Webb space telescope, destined to become the heir of Hubble, was born from the collaboration between NASA, the European Space Agency (ESA) and the Canadian Space Agency (CSA) . The United States, surprisingly, decided to anticipate the diffusion of the first image, with a great symbolic value, but in the next few hours many others will be revealed: in an international event, all the images that mark the beginning of the operational life of the space telescope, launched on December 25, 2021. The images will all be in infrared, because it is in this wavelength that the “eyes” of the James Webb telescope work, and there will be many for each of the five targets.

In addition to the SMACS 0723 galaxy cluster, which functions as a cosmic magnifying glass through which to see very distant galaxies, the telescope photographed the Carina Nebula (or Eta Carinae Nebula) in infrared, one of the largest and brightest in the world. Milky Way, a cradle of massive stars 7,600 light years away. He then captured images of the planet outside the Solar System WASP-96b, a giant made mostly of gas that is 1,150 light-years from Earth. Then there are images of the Southern Ring Nebula, an expanding cloud of gas surrounding a dying star. Finally, the shots of the five very close galaxies known as Stephan’s Quintet, 290 million years apart. “For each of these cosmic objects, the Webb telescope captured images with different instruments”, explained to Ansa Marco Sirianni, responsible for the development of the Webb telescope for ESA.