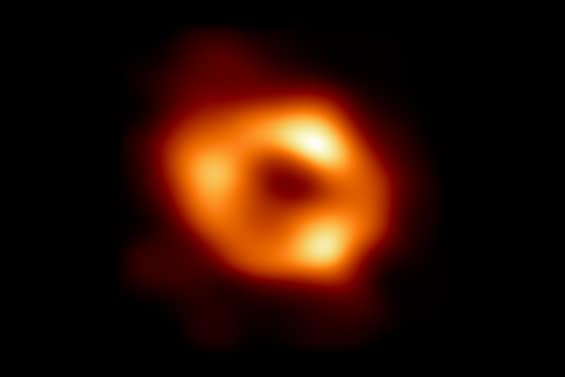 The supermassive black hole at the center of the Milky Way, the galaxy to which the Earth is part, was photographed for the first time thanks to the international collaboration Event Horizon Telescope (Eht) and with the Italian contribution of the National Institute of Astrophysics (Inaf), National Institute of Nuclear Physics (Infn), Federico II University of Naples and Cagliari. The image is the definitive proof that at the center of the Milky Way there is a black hole, the closest to our planet. Posted in 10 articles on The Astrophysical Journal Letters, the result is announced all over the world starting from Germany, with the European Southern Observatory (Eso); in Italy by Inaf, Infn and the two universities.

Three years after the first photo of a black hole, that of the galaxy M87, the new image definitively confirms the existence of a black hole at the center of our galaxy: “overwhelming proof”, as the researchers defined it in the press conference. organized in Rome. Also in this historical shot, the result of the work of more than 300 researchers from 80 institutes around the world that together form the Eht Collaboration, the black hole is not directly visible because it does not emit light: you can see a thick ring of bright gas, some size it would have if it were around the Moon, which surrounds a dark central region called ‘shadow’. The ring is produced by light distorted by the black hole’s powerful gravity, which has a mass equal to four million times that of the Sun and is 27,000 light-years away from Earth, in the direction of the constellation Sagittarius. Although the two black holes look very similar, that of the Milky Way is over a thousand times smaller and less massive than that of M87.

Image obtained thanks to the global network of eight radio telescopes

The photo was obtained thanks to a global network of eight radio telescopes, including the most powerful in the world: Alma (Atacama Large illimeter / submillimeter Array), in which Italy participates through the European Southern Observatory (Eso) and hosts the Italian node of the Alma European Regional Center at the INAF headquarters in Bologna. The radio telescopes work in unison, as if they were an instrument the size of Earth, and together they were pointed at the heart of the galaxy for several nights in April 2017, collecting data for many hours at a time, similar to doing a long exposure with a camera. Although Sagiuttarius A * is much closer than the first black hole immortalized in a photo, obtaining an image of it was much more difficult: since it is smaller, the gas rotates around it very quickly, taking a few minutes to complete an orbit around the black hole (versus the days taken by the gas around the black hole of M87). Consequently, to obtain the image it was necessary to make an average of the numerous images obtained in the search campaign.

Image distorted by the powerful gravity of the black hole

The new image captures light distorted by the black hole’s powerful gravity, which has a mass equal to four million times that of the Sun. “We were amazed at how much the size of the ring agrees with the predictions of the theory of general relativity. of Einstein “, comments Geoffrey Bower, EHT Project Scientist at the Sinica Academy of Taipei, Taiwan and at the University of Hawaii at Mnoa, in the United States. The findings are described in a series of articles published today, May 12, in a special issue of the journal The Astrophysical Journal Letters.

An “extraordinary” result, which demonstrates how important international collaboration in the scientific field is and how important it is for Italy to be part of it: this is how the Minister of University and Research, Maria Cristina Messa, commented on the photo of the black hole. “It is an extraordinary result, the extent of which – she said – we will be able to really realize only with time”.

“Congratulations to the great and global work group that made it possible to achieve it and, within it, to the Italian scientists. This discovery – continued Minister Messa – demonstrates how collaborative international research networks are fundamental for the progress of all, of how important it is for Italy to be part of it by investing, in a continuous and stable way over the years, in large research and data infrastructures, to strengthen and implement them more and more, and how an effort should be made to preserve these networks even in times of crisis “. The minister also noted that “this result also reminds us that we must not always be in a hurry to reach a certain result in a very short time: research has its own times and we must have the patience to adapt to these, knowing that it will always be worth it. “.