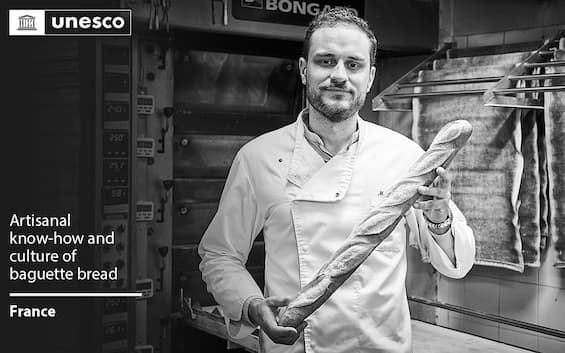 The baguette, emblem of the daily life of the French, has officially entered the list of intangible heritage of humanity by Unesco. This was announced by the Committee which met in Rabat, Morocco. The organization underlined “the artisan savoir-faire and the culture of the transalpine product which above all honors traditions” and which make it “an intangible cultural heritage”.

Every day, 12 million French consumers push open the door of a bakery and more than six billion baguettes leave French boulangeries every year. “It is a recognition for the community of artisan bakers and pastry chefs. The baguette is flour, water, salt, yeast and the know-how of the craftsman”, commented Dominique Anract, president of the National Confederation of French Bakery-Pastry Shops in a statement press. The choice to present the baguette candidacy was made in 2021 by France, which preferred it to the zinc roofs of Paris and a Jura wine festival.

Artisan bakeries are in decline

For the French, recognition is particularly important in an industrial context which threatens the life of small local businesses, especially in rural communities. In 1970 there were around 55,000 artisan bakeries (one oven for every 790 inhabitants) against 35,000 today (one every 2,000 inhabitants), this translates into the disappearance of 400 bakeries a year on average for fifty years. President Emmanuel Macron had given his support to the dossier, describing the baguette as “250 grams of magic and perfection”.