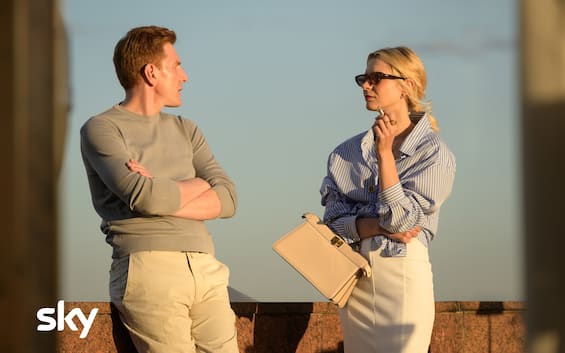 High pressing, sudden counter-attack, through ball, cross into the area… It is not a football match, but “The Great Game” of the transfer market, where everything is orchestrated to score goals, which in the case of prosecutors means securing a proxy… or making it vanish someone else’s. New appointment, exclusively on Sky and streaming only on NOW, with The Great Game, the Sky Original series produced by Sky Studios and Èliseo entertainment: fifth and sixth episodes tomorrow, Friday 2 December, in prime time on Sky Atlantic. The new episodes will obviously also be available on demand.

Francis Montanari (The hunter, The Medici – In the name of the family) plays Corso Manni, a prosecutor who fell into disgrace for an alleged link with the world of clandestine betting. With him Elena Radonicich (1992, The red door, Fabrizio De André – Free Prince) as Elena De Gregorio, Manni’s ex-wife and attorney herself, and David di Donatello winner and Oscar nominee Giancarlo Giannini (Casino Royale, The heart elsewhere, Pasqualino Seven Beauties), who in the series plays Dino De Gregorio, Elena’s father, founder and CEO of the most powerful football agency in Italy against whom Corso is contemplating revenge. In the cast also Lorenzo Cervasio (Like a cat on the ring road – Return to Coccia di Morto, Human Capital) as Federico De Gregorio, Elena’s younger brother, Jesus Mosquera Bernal (Toy Boy), who here plays the champion Carlos Quintana, Lorenzo Aloi (Break up one day in Rome, Fidelity, The company of the Swan 2) in the role of Marco Assari, a young and very talented attorney, Giovanni Crozza Signoris (The Traitor, Zero), who will lend his face to the young football promise Antonio Lagioia, and Vladimir Aleksic in the role of Sasha Kirillov, an unscrupulous Russian prosecutor.

THE BIG GAMESYNOPSIS EPISODES 5 AND 6

In the fifth and sixth episodes Corso has a cathartic experience in the villa where he and Elena lived when they were together. Lagioia creates sparks at Milan but Assari, without Corso’s supervision, undermines the relationship with the footballer. Valeria quits as Elena’s assistant. It is open war between Elena and Dino, who finds a precious ally in Corso, all while Kirillov tries to take possession of the precious land owned by the ISG. Dino and Corso take advantage of the disagreement between Elena and Kirillov about the team to send Quintana to, making the player’s arrival at Milan fade and ensuring Lagioia’s future in the team. Assari convinces Valeria to join him and Corso, while Elena manages to steal Lagioia’s power of attorney from Corso and discovers the real value of the ISG lands and Kirillov’s true intentions.

The Great Game, is created by Tommaso Capolicchio, Giacomo Durzi, Filippo Kalomenidis, Marcello Olivieri. From an idea by Alessandro Roja, with the collaboration of Riccardo Grandi. Directed by Fabio Resinaro & Nico Marzano.