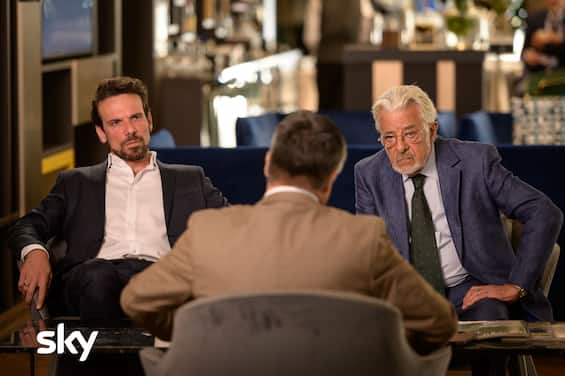 The wait is the nerve-wracking one of a final that came to penalties. In front of goal, only the great champions remain to gamble for everything and Corso Manni, one of the best sports agent around, is about to hit his decisive penalty, the one that will decide his victory – and therefore his definitive rehabilitation – or defeat… exclusive on Sky and streaming only on NOW returns for the grand finale The Great Gamethe Sky Original series produced by Sky Studios and Èliseo entertainment on the secrets of the transfer market: seventh and eighth episodes tonight, Friday 9 December, in prime time on Sky Atlantic (they will also be available on demand).

Francis Montanari (The hunter, The Medici – In the name of the family) plays Corso Manni, a prosecutor who fell into disgrace for an alleged link with the world of clandestine betting. With him Elena Radonicich (1992, The red door, Fabrizio De André – Free Prince) as Elena De Gregorio, Manni’s ex-wife and attorney herself, and David di Donatello winner and Oscar nominee Giancarlo Giannini (Casino Royale, The heart elsewhere, Pasqualino Seven Beauties), who in the series plays Dino De Gregorio, Elena’s father, founder and CEO of the most powerful football agency in Italy against whom Corso is contemplating revenge.

THE BIG GAMETHE REST OF THE CAST

In the cast also Lorenzo Cervasio (Like a cat on the ring road – Return to Coccia di Morto, Human Capital) as Federico De Gregorio, Elena’s younger brother, Jesus Mosquera Bernal (Toy Boy), who here plays the champion Carlos Quintana, Lorenzo Aloi (Break up one day in Rome, Fidelity, The company of the Swan 2) in the role of Marco Assari, a young and very talented attorney, Giovanni Crozza Signoris (The Traitor, Zero), who will lend his face to the young football promise Antonio Lagioia, and Vladimir Aleksic in the role of Sasha Kirillov, an unscrupulous Russian prosecutor.

THE BIG GAMESYNOPSIS OF THE LAST TWO EPISODES

In the seventh and eighth episode Kirillov manages to bring Quintana to Milan and Elena for revenge circulates the video of Quintana and Valeria, causing the player’s removal from the team. Thanks to Assari and Valeria, Corso takes the opportunity to bring Quintana back to Atletico Madrid, and deceives himself into proving Elena’s responsibility in publishing the video. Meanwhile Lagioia is impatient with the management of the ISG on his image. At the San Siro stadium Atletico Madrid vs Milan are being played: Lagioia and Quintana face off with immense sportsmanship. Lagioia has an injury and is getting closer to Assari. In the skybox Corso puts Elena against the wall and forces her to resign from the ISG, while Dino offers Kirillov her land in exchange for her removal. Dino is CEO again and before he dies he makes unexpected choices, turning the situation around.

The Great Game is created by Tommaso Capolicchio, Giacomo Durzi, Filippo Kalomenidis, Marcello Olivieri. From an idea by Alessandro Roia, with the collaboration of Riccardo Grandi. Directed by Fabio Resinaro & Nico Marzano.