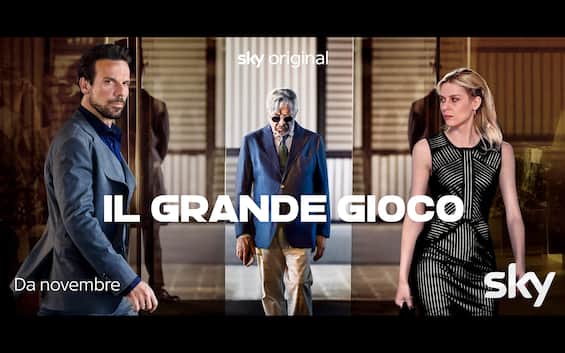 Billionaires deals, unscrupulous characters, dream locations and heart-pounding negotiations. The transfer market is one of the most exciting moments of the entire football season, and his golden and ruthless world is now – for the first time – at the center of a TV series, The Great Gamethe new Sky Original title of which the teaser is released today and announced the debut: from November exclusively on Sky and streaming only on NOW.

Behind the scenes of football in a Sky Studios and Èliseo entertainment series produced by Luca Barbareschi and directed by Fabio Resinaro (Mine, Dolceroma) & Nico Marzano, who sees Francesco Montanari (The hunter, The Medici – In the name of the family) again protagonist of a Sky series more than ten years after the hugely popular Criminal Novel – The series. Neither The Great Game plays Corso Manni, a star in the world of football prosecutors up to ten years before the start of this story, who fell out of favor due to an alleged connection with the world of clandestine betting.

THE GREAT GAMETHE REST OF THE CAST

Protagonists with him also Elena Radonicich (1992, The red door, Fabrizio De André – Free Prince) in the role of Elena De Gregorio, Manni’s ex-wife and attorney in turn, and the winner of the David di Donatello and Oscar nominee Giancarlo Giannini (Casino Royale, The heart elsewhere, Pasqualino Settebellezze), who in the series plays Dino De Gregorio, Elena’s father, founder and CEO of the most powerful footballing agency in Italy against which Corso meditates revenge.

Montanari, Radonicich and Giannini lead a great international cast which also includes Lorenzo Cervasio (Like a cat on the ring road – Return to Coccia di Morto, Human Capital) in the role of Federico De Gregorio, Elena’s younger brother, Jesus Mosquera Bernal (Toy Boy), who here plays the champion Carlos Quintana, Lorenzo Aloi (Leave one day in Rome, Fidelity, The company of the Swan 2) in the role of Marco Assari, young and talented prosecutor, Giovanni Crozza Signoris (The Traitor, Zero), who will lend his face to the promising young football player Antonio Lagioia, and Vladimir Aleksic as Sasha Kirillov, an unscrupulous Russian prosecutor.

In eight episodes written by Tommaso Capolicchio, Giacomo Durzi, Filippo Kalomenidis, Marcello Olivieri and Andrea Cotti, the series tells for the first time the work of sports prosecutors without neglecting the economic and political interests that can gravitate behind the hiring of a football player or the success of an entire team. Tommaso Capolicchio, Giacomo Durzi, Filippo Kalomenidis and Marcello Olivieri are the creators of the series, created starting from an idea by Alessandro Roja with the collaboration of Riccardo Grandi.

Discredited by false accusations, Corso Manni (Francesco Montanari) has gone from being the golden boy of ISG prosecutors, the largest company of prosecutors in Italy, to being marginalized by the football world. With the help of the young prosecutor Marco Assari, Corso reconstructs his career by competing for the proxy of the champion Quintana and the promising Antonio Lagioia with Dino De Gregorio (Giancarlo Giannini) and Elena De Gregorio (Elena Radonicich), respectively CEO of the

ISG and his ex-wife. An unexpected game of alliances and betrayals takes shape with the entry of Sasha Kirillov, a seasoned prosecutor for the Russian Plustar, determined to conquer not only the Italian football market, but also the precious land owned by the ISG.

The Great Game will be available exclusively on Sky and streaming only on NOW in all countries where Sky is present. International distribution is by NBCUniversal on behalf of Sky Studios.