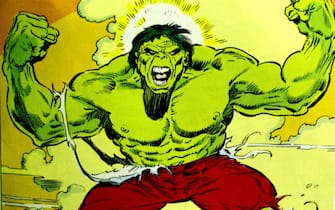 The first issue of “The Incredible Hulk”, created by the happy marriage between cartoonist Stan Lee and cartoonist Jack Kirby for Marvel Comics, was released in the United States in early May 1962 – From the set of “The Avengers”

She Hulk, the trailer for the tv series

The protagonist of the comic is the nuclear physicist Bruce Banner who, during an experiment on a gamma-ray bomb (the USA was in the middle of the Cold War, with the risk of an atomic conflict with the USSR), notices the presence of the young Rick Jones and rushes to save his life – A return to the cold war?

Marvel movies, in what order to see them

Banner succeeds in his intent but remains exposed to radiation. After sunset, he realizes that something has changed in him: his body suddenly begins to grow, until it transforms into a gray giant- Hulk

In the first version of the comic, in fact, the Hulk was gray, a color that was immediately changed to green because the typographic rendering was considered poor – 50 years of the Hulk

50 years of the Hulk

Stan Lee (pictured), who the year before – again with Kirby – had baked the “Fantastic Four”, was inspired by two masterpieces of the science fiction novel in conceiving the character: “Frankenstein” by Mary Shelley and “The Strange Case of Dr. Jekyll and Mr. Hyde “by Robert Louis Stevenson – Farewell to Gene Wilder, the most loved Frankenstein

Farewell to Gene Wilder, the most loved Frankenstein

Just in homage to Frankenstein, gray was the initial color of the Hulk’s skin, while like Dr. Jekyll, the character only transformed when darkness fell. From the second issue, in addition to the skin, the logic of the transformation also changed, triggered by strong emotions (fits of anger or pain related to the past) – Dr. Jekyll and Mr. Hyde

The protagonist experiences his state as a handicap that he tries to keep hidden, in particular from the men of General Thaddeus Ross who hunt him down as they consider him a danger to society. In the photo a scene from the movie “The Incredible Hulk” – 2017 films dedicated to comic book heroes

The first series stopped in March 1963, not even a year after the release of the first issue, due to the sales flop in part caused by the debut of a new Marvel character: Spider-Man – Spiderman, the new trailer

In our country the Hulk made his first appearance only eight years later, in June 1971, in the series “The Mythical Thor” of the Editorial Corno. In the following years, many versions of the character, not always with green skin – The Mythical Thor

Just at the end of the seventies the Hulk made a comeback, thanks to the bodybuilder Lou Ferrigno who impersonated him in a popular TV series which was followed by an animated series. Following this success, in 1980 in Italy began the publication of the monthly “The Incredible Hulk” – The story of Lou Ferrigno

The story of Lou Ferrigno

“The Incredible Hulk”, the trailer

Due to the poor box office success of Ang Lee’s film, a reboot titled The Incredible Hulk directed by Louis Leterrier was released in 2008. This the protagonist is Edwars Norton

Norton was also expected to play Bruce Banner in The Avengers (2012) and subsequent sequels, but after some negotiations he was replaced by Mark Ruffalo.