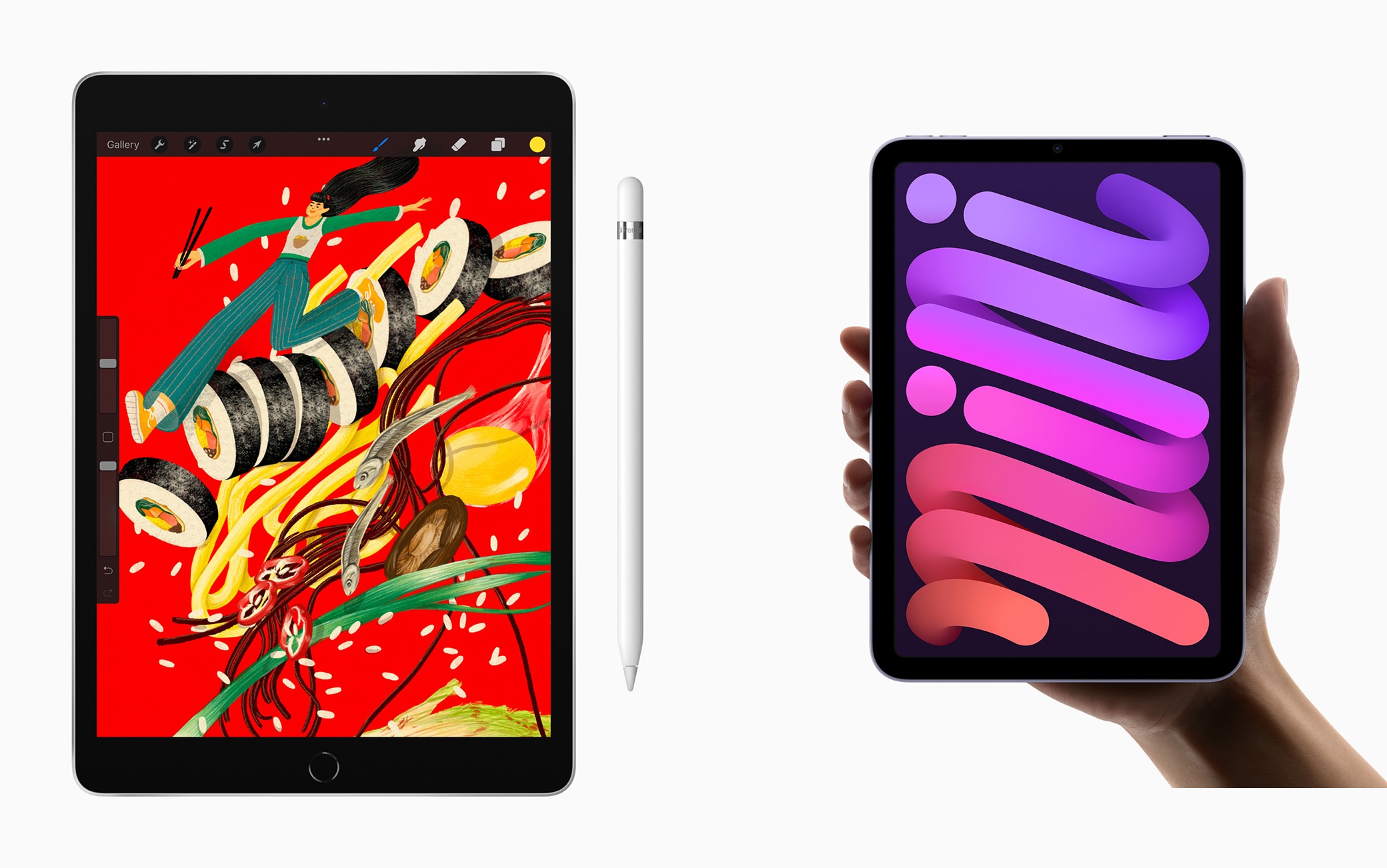 On the one hand, the new iPad Mini, which gets numerous updates and becomes more powerful and efficient. On the other hand, the new traditional iPad, the most economical and suitable for most consumer needs. We tested the new iPad models from Apple presented in early September, along with the new iPhone 13 and the Apple Watch at the California Streaming event.

The iPad Mini, now in its sixth generation, remains the smallest of the family but thanks to the A15 Bionic chip it becomes more powerful, reaching – they explain from Apple – up to 80 percent faster performance than the previous generation. The smallest and most portable iPad (weighing just under 300 grams by just over 6 millimeters thick) has a very bright 8.3-inch retina display and becomes the ideal travel companion even for professionals who need a tablet. light, practical and not bulky: it can perform machine learning and artificial intelligence operations in a more efficient way, at the same time saving battery. iPad Mini is also ready for video calls and virtual meetings: it has a 12 megapixel front camera which, as we had already seen in iPad Pro, gets the useful Center Stage feature, automatic framing: when we are talking to someone, regardless of the app we are using, the camera moves or enlarges the frame to always keep us in the center; and if another person arrives, the camera automatically recognizes them and widens the perspective. The rear camera also has a 12 megapixel sensor and can be used to take photos, scan documents or use professional applications.

iPad Mini: the battery and accessories

On board the iPad Mini we find a USB-C port for battery charging and for fast connection to other devices (transfers up to 5 Gbps) or to external monitors (supports up to 4K resolution). As for the battery we were satisfied: Apple promises up to 10 hours of continuous use and in our test, on the road, with occasional use we used it up to three days, while with intense use we used iPad Mini from the morning to evening. Charging, with the 20W adapter included in the package, takes just under two hours (in our test it recharges 35% in 30 minutes and 67% in one hour). Just like the iPad Air, the iPad Mini also integrates the Touch ID fingerprint sensor in the upper right button. As always it is possible to associate different accessories to the iPad. We tried the second generation Apple Pencil pen, which is magnetically recharged on the long side of the tablet and allows you to draw, sign documents or take notes (sold separately for 135 euros) and the useful Smart Folio case (price: 65 euros) in able to protect the screen of the device and act as a support for watching movies or TV series. Finally, iPad Mini is built with attention to the environment: it has a shell made entirely of recycled aluminum, uses 100% recycled tin for the welding of the logic board and 100% of recycled rare earths in the magnets of the shell and in the speakers. .

The new iPad: the main features

Along with the iPad Mini comes the new traditional iPad, the ninth generation. It is the most popular iPad and also the one that is suitable for most customers. On board we find the A13 Bionic chip (“20 percent faster than the previous generation”, promise from Apple) capable of running applications smoothly and quickly. The 10.2-inch display evolves with a new ambient light sensor, which automatically adjusts brightness, while images appear more natural thanks to True Tone technology that adjusts the displayed content based on the color temperature in the room. Again there is a 12 megapixel ultra-wide-angle front camera with Center Stage functionality for video calls and meetings. The traditional iPad is light but not very light: it weighs about 500 grams.

The new iPad: the battery, accessories and attention to the environment

For the new Apple iPad this year no new accessories were presented but it is possible to use those of the previous generation. In particular, it is possible to associate the iPad with a first generation Apple Pencil (to be purchased separately for 99 euros), the always useful Smart Keyboard cover-keyboard (179 euros) or the protective Smart Cover (55 euros). As for the battery, we have not noticed any changes compared to the previous version: it is charged with the Lightning socket and offers power even for several days, with average use. In terms of charge, the new iPad with the included adapter recharges in about two and a half hours (in our test it recharges up to 24% in 30 minutes, up to 43% in an hour). Also in this case, as for the Mini model, the shell is made entirely of recycled aluminum, recycled tin is used for the soldering of the logic board and 100% of recycled rare earths in the magnets of the shell.

The real novelty of this year, therefore, is the update of the iPad Mini which transforms itself into a real center for ultra-portable productivity and entertainment: it is very light, fits in a jacket pocket or in any type of bag and is very performing. The traditional iPad, on the other hand, is very similar to that of the previous generation and we would like to recommend it to those who have to buy one for the first time or to those who come with an iPad purchased before 2019 and need a faster and more performing product. .

iPad Mini is sold in four colors: pink, galaxy, purple, and space gray; there are two memory cuts (64 and 256 gigabytes) as well as two models: Wi-Fi and Wi-Fi + Cellular: the first starts at 559 euros, the second from 729 euros.

The traditional iPad is sold in silver and space gray finishes in two memory denominations: 64 and 256 gigabytes. Here too there are two models: Wi-Fi, starting price 389 euros, and Wi-Fi + Cellular at a starting price of 529 euros.