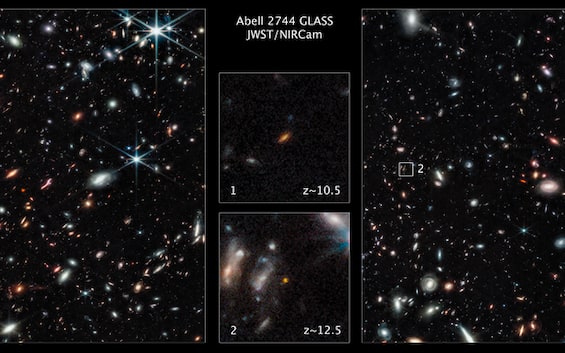 The curtain finally rises on the dawn of the cosmos thanks to the new James Webb (JWST) space telescope, launched last Christmas by the space agencies of the United States (NASA), Europe (ESA) and Canada (CSA). In its first scientific observations, the largest and most powerful space telescope ever built managed to immortalize two of the very first galaxies of the early universe, between 350 and 450 million years after the Big Bang. A revolutionary result that opens a new era for astronomy, as indicated by the study published in The Astrophysical Journal Letters by an international team led by Italy with the National Institute of Astrophysics (INAF). Researchers from the Space Science Data Center of the Italian Space Agency (ASI), the University of Ferrara and the University of Milan also participated in the collaboration.

The oldest galaxies ever seen

The two galaxies, among the oldest ever seen so far, were identified thanks to the observations of the distant galaxy cluster Abell 2744 and of two regions of the sky adjacent to it, made by the space telescope between 28 and 29 June as part of the Glass-Jwst Early Release Science Program project. The group led by Marco Castellano, INAF researcher in Rome, was among the first to use Jwst data, publishing a pre-print on the arXiv platform in July, just five days after the data had been made available. “There was a lot of curiosity to finally see what Jwst could tell us about the cosmic dawn, as well as of course the desire and ambition to be the first to show the scientific community the results obtained from our Glass survey,” says Castellano. “It was not easy to analyze such new data in a short time: the collaboration worked 7 days a week and practically 24 hours a day also thanks to the fact that we have a participation that covers all time zones”.

The researcher: “New chapter for astronomy”

So much effort has been rewarded with extraordinary results. “These observations are revolutionary: a new chapter in astronomy has opened”, comments Paola Santini, INAF researcher in Rome and co-author of the article. “Already after the very first days from the beginning of the data collection, Jwst has shown to be able to reveal astrophysical sources in still unexplored epochs”. These ancient galaxies “are very different from the Milky Way or other large galaxies we see around us today,” explains Glass-Jwst project leader Tommaso Treu, a professor at the University of California at Los Angeles and one of the protagonists of a conference press organized by NASA to present the new results.

The JWST observations seem to indicate that galaxies in the early universe were much brighter, though more compact than expected. If true, it could make it easier for the telescope to find even more of these early galaxies in its next observations. The distance of the two ancient galaxies will have to be confirmed with greater precision, but they are already the most robust candidates selected to date with JWST data. The reliability of the results is confirmed by the agreement with what was found in other studies, such as the work led by Rohan Naidu of the Harvard Center for Astrophysics (USA), also published in The Astrophysical Journal Letters.