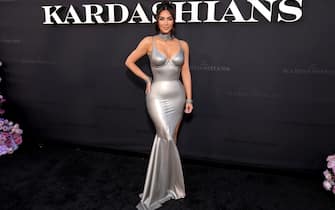 Kim Kardashian is the most anticipated of the special premiere of The Kardashians which was held in Los Angeles in the presence of a large part of the cast. The event was attended by some of the best known members of the family and many well-known faces of the stars and stripes showbiz. Ex Mrs. West wore Thierry Mugler, a silver matte latex dress

Kris Jenner and the companion Corey Gamble they stood out for wearing dresses with coordinated shades. For the mother-manager of the family, a Valentino total look in the latest brilliant shade of pink created by the Maison

The Kardashians, the official poster of the new show is out

Along with Kris Jenner and Kim Kardashian pose Ben Winston, one of the show’s executive producers, and Khloe Kardashian with little True Thompson

The Kardashians, trailer of the original series to be released on April 14

Kourtney Kardashian will be one of the most watched of the new reality show where she will appear in the company of the now ubiquitous official boyfriend / future husband Travis Barker. For the eldest daughter of the family, an intriguing Valentino dress

Kourtney Kardashian confirms marriage but explains: “They are not legal weddings”

Among those present, as an in-laws member of the family, Landon Asher Barkerone of the sons of Travis Barker, born in 2003

The Kardashians: the teaser trailer of the Disney + TV series which will be released on April 18th

Jonathan Chebanone of Kim Kardashian’s closest friends, often featured in episodes of the historic reality show about the Kardashian family that aired for twenty seasons, couldn’t miss the event in Los Angeles

Scott Disick and the model Rebecca Donaldson they appeared as a couple at the event in Los Angeles. Disick, former partner of Kourtney Kardashian and father of her three children, is a historical protagonist of the reality show and one of the most beloved faces of the family

The American model Atiana De La Hoya is the daughter of Shanna Moakler, former wife of Travis Barker. She was a guest of the premiere

The Kardashians, stars of the web and social media, cannot fail to have influencers and youtubers as guests. From the left, Anastasia Kingsnorth And Saffron Barkerpose together on the carpet

Among the guests from the US show business, also the singer, actress and dancer Teyana Taylor with her husband Iman Shumpert