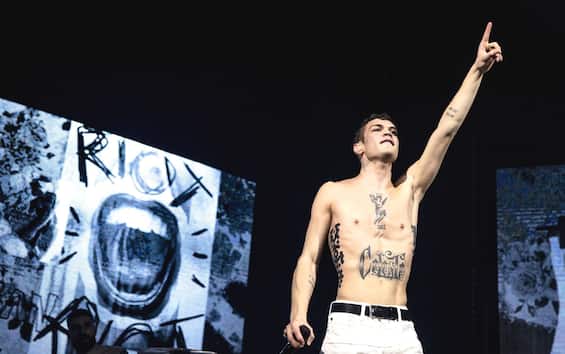 Blanco will be the protagonist of the Goa Boa Festival XXIV Edition, in Genoa. Here the singer-songwriter doubled with two sold out, thus recovering the inaugural date of the tour scheduled at the Parco degli Erzelli, postponed due to a small accident.

Blanco will animate the Goa Boa Festival XXIV Edition of Genoa with a double appointment. Two sold out concertstonight 12 September and tomorrow, at the Arena del Mare in via Calata Cattaneo, which are also the last two stages of his Blue Celeste Tour. Fans are ready to sing the most famous songs that have made Riccardo Fabbriconi, the real name of the Brescian artist, among the most loved and followed of the last year. The installation, conceived by Fabio Novembre, tells the most intimate world of Blanco through the light design and the large LED wall screens that surround the stage. Spectators will be greeted by the singer’s bedroom, the place where he started writing and where it all began, then moving on to the aquatic landscapes evoked by his debut album. On stage together with Blanco also the producer and multi-instrumentalist Michelangelo and a band composed of Jacopo Volpe on drums and Emanuele Nazzaro on bass. Produced and distributed by Vivo Concerti and Friends & Partners, the Blue Celeste Tour he scored over 300 thousand tickets sold. Not only that: the album of the same name, in these hours, has crossed the important milestone of a year of permanence in the charts, has won 5 platinum discs for over 250 thousand copies sold and which boasts all 12 tracks of the tracklist with at least one certification. In addition to having collected in less than a year 27 platinum discs and 7 gold discsBlanco is the youngest Italian artist to have positioned himself for 18 weeks at the top of the Fimi / GfK ranking of best-selling singles and the second most listened to 2021 artist on Spotify.

There is great anticipation for Blanco fans, who will be able to listen to their idol on the stage of the Goa Boa Festival tonight. Although the official lineup has not been released, here’s what it could be the order of the songs for tonight’s concert based on the previous stages. Chills it will be sung by Blanco in the solo version.