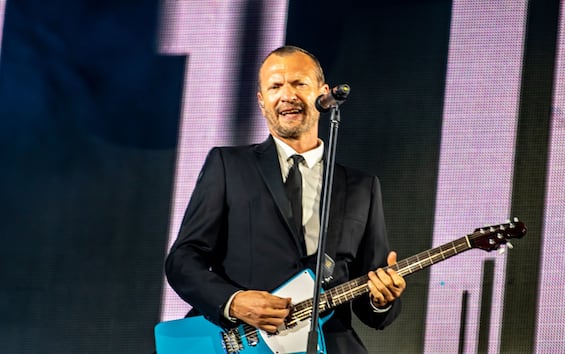 Biagio Antonacci he has an extraordinary career behind him, with few equals on the Italian scene. He is part of that generation of artists who had a long apprenticeship before establishing himself on the national music scene. Voice and guitar, Biagio Antonacci wrote songs that have rightfully entered the history of Italian music and that are still known today by the new generations. Listed among the most fascinating singers in the country, because even this can sometimes make a difference, closing his eyes his voice is easily recognizable and identifiable among those of his colleagues. Impossible not to recognize the warm and enveloping timbre of the singer’s voice, who in addition to being an extraordinary songwriter has also written songs for other of his colleagues. Rock soul and sensitive at the same time, Biagio Antonacci is back on the stages after a long stop with a tour that in the coming weeks will take him to play all over Italy. Tonight, Tuesday 8 November, he will be the protagonist of a concert in Rome.

Biagio Antonacci in concert in Rome, the lineup

Time runs fast but Biagio Antonacci’s fans have not gone unnoticed by the fact that the artist has been missing from the stages for 4 years. In fact, Biagio Antonacci’s last solo tour dates back to 2018. Of course, the following year he did some concerts with his great friend Laura Pausini, but it’s not the same thing. The performances with the Romagna artist were an extraordinary moment for those who love music, because the feeling and understanding between the two is perhaps one of the strongest in the entire Italian music scene. Antonacci, on the other hand, has written numerous successes for Laura Pausini. However, fans also want to attend the solo concerts of their idol, who in these cases can manage the lineup with the songs most suited to his musical history. Biagio Antonacci is an artist who over time has been able to attract the attention of several generations, retaining in his parterre of enthusiasts even those who were very young in the eighties at the beginning. Impossible to have an official lineup for tonight’s concert but referring to the last live, the release order could be this, with the addition of the new songs:

The concerts of Biagio Antonacci

Biagio Antonacci’s appointment in Rome will be double to respond to all requests for tickets that have been made by fans and that it would not have been possible to comply in any other way. Then, Antonacci will play and sing in Eboli, Turin, Bari and Florence. Two other dates are also planned in Milan.