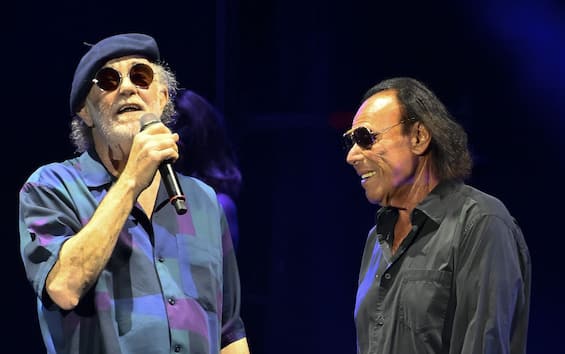 There are concerts that, due to their history and their ambitions, have something different from the others. Among these, there is certainly the concert of Antonello Venditti and Francesco De Gregori in Rome. Antonello Venditti and Rome are two sides of the same coin: inseparable and insoluble. The thread that binds the singer-songwriter to the capital is often indestructible, so much so that Antonello Venditti has become almost an integral part of the city, like one of his monuments or like the Tiber. After the event at the Olympic stadium this summer, and after touring Italy collecting successes in every stage, the two decided to return to Rome for two days of extraordinary music at theAuditorium Parco della Musica.

Venditti and De Gregori in concert in Rome

Antonelli Venditti and Francesco De Gregori together have one of the most extraordinary repertoires of Italian music. Inevitably, one of their concerts is a concentrate of some of the songs that have written the history of our country’s music, masterpieces that have no time, known by all generations, played and sung at the top of their voices on every occasion. If you add to this the extraordinary atmosphere of a concert in Rome, everything takes on an even more incredible and magical dimension. And it is perhaps this mix that pays off memorable the concerts of this unique couple of artists, two personalities so different that they are almost similar, so much so that the versions sung in pairs of their most popular songs take on an almost dreamlike dimension for the audience.

Venditti and De Gregori, the lineup

The lineup of the concert in Rome on 2 September for Venditti and De Gregori could follow that of Olympic stadium: an extraordinary journey into the music and sounds of a duo that is unaffected by the passing of time. The official lineup has not been disclosed, but it is presumed that the songs on the program are: