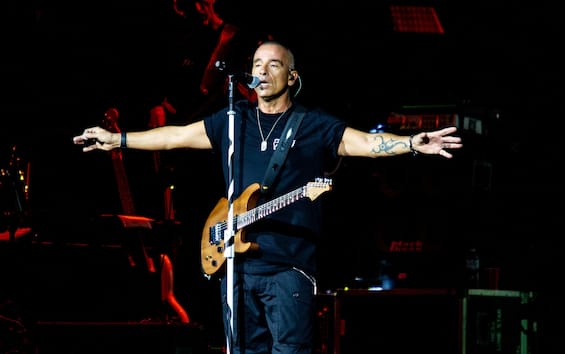 That of Eros Ramazzotti is one of the most anticipated tours of the season. The Roman singer-songwriter is back on the stages after a long wait with an international show that will lead him to perform in numerous high-caliber squares. A tour started from Sevilla with a zero date. Eros Ramazzotti has chosen to return to the stage for the promotion of his new record, Infinite beat, released this year, which has already garnered positive opinions from critics and audiences. The date of Seville it was also an opportunity to meet old friends again and perform in front of the affections of all time, especially his daughter

Aurora, who flew to Spain with her boyfriend to follow her father’s return to the scene and who is not excluded may also show up on the occasion of the concert at theArena of Verona tonight, Wednesday 20 September, the first of 4 consecutive appointments in one of the most prestigious locations in Europe.

Eros Ramazzotti in concert at the Verona Arena, the lineup

There are 4 dates of World tour premiere by Ramazzotti at the Verona Arena and, of these, one is already sold-out. For the others, the number of tickets is limited, a sign that the Roman singer-songwriter, who has been on the square for over 40 years, has been able to keep the public’s interest in his music and his character alive. The repertoire of Eros Ramazzotti is certainly wide and varied and it could only be so for an artist who has dozens of hits and records sold all over the world. Eros Ramazzotti has been able to perfectly balance yesterday’s hits and today’s songs in a lineup of high artistic value, which almost represents a journey into the music of the Roman singer-songwriter, whose songs have spanned generations. Young people of yesterday and today are ready to sing on the notes of the most famous songs and on the new proposals. And even if the lineup hasn’t been made official yet, it should look very similar to this:

The next dates of the Eros Ramazzotti tour

After the four dates at the Verona Arena, Eros Ramazzotti will take a few weeks’ break. In fact, the World Tour Premiere of the artist, who gives February will return to the stage with other dates for the European and world tour that will lead him to perform in the main cities of the planet in a very long and exciting journey.