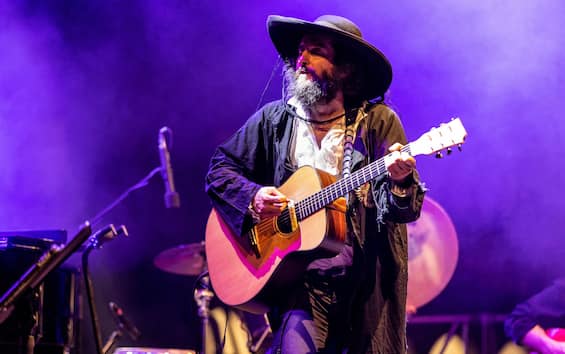 The Italian tour of Vinicio Capossela, which is touching many places, many of which are far from the most crowded destinations of summer tourism. Probably a well-considered choice by the singer-songwriter, far from the concept of mainstream and “mass phenomena”, that he has decided to opt for more discreet locations in which to find an audience really interested in listening to his music. Vinicio Capossela has been active on the music scene for over thirty years and despite the many possibilities he had and the numerous sirens, he has never betrayed his identity and his musical base, continuing to be one of the most prominent exponents of music Italian author, so much so that he is one of the artists to have received the highest number of awards from the Tenco Club. Today, Thursday 25 and Saturday 27 August, Vinicio Capossela will be the protagonist on the stage of the Sponz Fest di Calitri, a festival that he himself conceived in his father’s hometown, in the upper Irpinia.

Vinicio Capossela in concert in Calitri, the lineup

There are numerous songs by Vinicio Capossela that have achieved success in the national and, sometimes, international charts. The singer-songwriter has a wide repertoire from which to draw the songs for the structuring of the lineup of his concerts and, in fact, there is a great attention in the care of the songs that have been chosen for the concerts of the 2022 tour. Vinicio Capossela is a refined singer-songwriter, whose melodies are so anachronistic as to make them cool, although this is not the goal that Capossela wants to pursue with his production. Calitri is one of the places of the heart for Vinicio Capossela, born in Germany to immigrant parents. In his father’s hometown he wanted to make a cultural festival, rather than musical, in which the notes become the ideal accompaniment for evenings dedicated to dialogue and knowledge. Vinicio Capossela’s concert in Calitri will probably be different from the others, also considering that he has called to him numerous other artists who will accompany him on this evening, now traditional for the Irpinia country. Referring to the lineup of Vinicio Capossela’s previous concerts, the order of release of the songs should be:

The dates of Calitri di Vinicio Capossela are the tail of the singer-songwriter’s summer tour, which will end next September 1st in Ruvo di Puglia, in the province of Bari. In the coming months some dates of an indoor winter and autumn tour are planned.