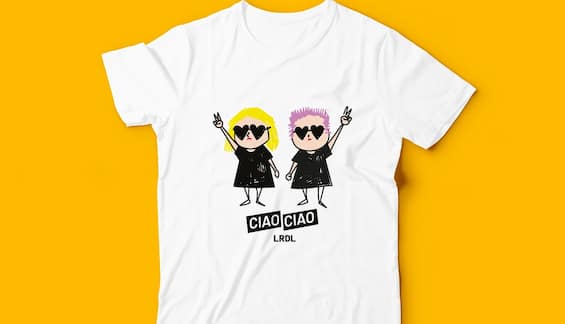 Six months after the start of the escalation of the conflict in Ukraine, and after the great success of IT’S UP TO US – Music for Peacethe great concert of 5 April in Piazza Maggiore in Bologna, The List Representative relaunches its commitment alongside Save the Children to support children affected by the violence of war with a new initiative. Veronica Lucchesi and Dario Mangiaracina they have in fact decided to create a Special T-shirt, HELLO HELLO – AMLA for Save the Childrendedicated to their collaboration with the international organization that for over 100 years has been fighting to save girls and boys in danger and to guarantee them a future, to help children who continue to suffer every day the terrible consequences of the Ukrainian conflict.

From February 24 to August 10, 2022, nearly 1,000 children were killed or injured – an average of 5 children a day – and 16% of those who lost their lives were under the age of 5, while more than 6 million were forced to leave their homes by displacing within the country or seeking safety in other countries. The new T-shirt launched today, 100% organic, is available for purchase with pre-order in the versions for children and adults on the website www.woodworm-music.com, which has taken care of the production, and will contribute, thanks to donate part of the proceeds from the sale, to support Save the Children’s interventions in Ukraine, in neighboring countries and also in Italy, to protect and assist children and their families. It will also be an opportunity to continue to actively involve an increasingly large number of people in the active dissemination of a message of awareness for the constant construction of peace in the world. “Today a very sad anniversary. Six months of war (if we talk about the one that broke out after the Russian invasion of Ukraine). Media attention is falling, but there are realities like Save the Children that continue to operate even with the cameras off in all those territories (many, too many!) Where war afflicts the population and above all the weakest, including children and little girls. After the shared experience for “Tocca a Noi” in Bologna we decided to continue our collaboration by producing these t-shirts. Part of the proceeds from the sales will go to the NGO and to support their projects ”- said the List Representative. “Ukrainian children who have been killed or injured, and those who are currently in danger or in grave distress, had and have nothing to do with the war, but suffer the most serious consequences, today and for the their future. Save the Children works tirelessly on the ground every day to try to protect them and respond to their most urgent needs, but we can do it only thanks to the many people who make it possible with their contribution. Lista, once again at our side with this initiative that we hope will have a great following, is doubly important, for the concrete support, but also for the multiplication of a strong message on the rejection of war and on the need to protect children, who are the more exposed and risk losing or seeing their future compromised ”declared Daniela Fatarella, Director General of Save the Children Italy.