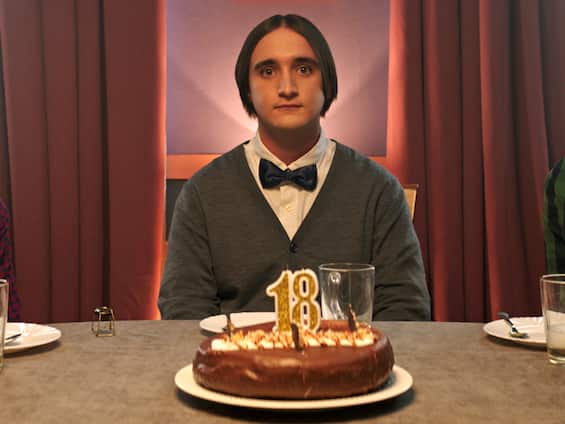 Giacinto feels out of place. Giacinto is alone and feels he has no purpose in the world or a particular talent other than survival. He also tells Rocky’s character who replies that it’s not true, he knows how to do one thing: run. Will Giacinto use this ability to escape to a place capable of making him feel truly free for the first time, without the impositions of society or the bars of a prison standing between him and everything that awaits him outside?

Forrest Gump grew up behind bars

The protagonist of The great race he is a provincial Forrest Gump, naive like someone who grew up in a universe with separate rules such as prison. Giacinto didn’t end up there for some crime: his only “fault” is that he was born of the wrong parents, the son of someone who is paying for his mistakes in a place where no child or young adult could ever take flight. The protagonist finds a surrogate father figure in Jack, the head of the guards, but he also knows that this cannot be his normality forever. However, the courage to find another everyday life must be sought. We must find the strength to take that step which metaphorically means taking on the responsibilities of adulthood. Giacinto doesn’t know if he has the tools to make that cursed leap forward without getting swallowed up in quicksand and for this reason he will embark on a great race, primarily to try to achieve what he wants to become. The protagonist of the latest film by Andrea Magnani he almost looks like a cousin of the Isidoro at the center of the director’s debut feature: Easy – An easy journey. Just as Isidoro didn’t seem to be able to fit inside a go-kart and above all inside a reality that made him feel uncomfortable, so Giacinto looks like a fish out of water. Both to escape their designated outsider role must step out of their comfort zone, escape to a place that could be the Ukraine of Easy or the world beyond the penitentiary of The Great Race. Two similar but in their own way very personal stories, daughters of the vision of the world of a screenwriter and director determined to tell his story by the wrong way too.

Kisses from the province

Andrea Magnani was born in Rimini and today lives between Rome and Trieste. However, his youth is not tied so much to a precise place as more to a concept, the province: an entity from which it is difficult to escape. The story of his latest film he hears a little about her, even if the bars that she saw in front of the window were only metaphorical for him. Magnani wrote a first treatment of this story twenty years ago now, when he was the boy who wanted to start a long run that would take him away from home: “The inspiration for the story of Giacinto came to me thinking about my childhood and to the place where I grew up, a city that felt very small and always still.

People were born, lived their lives and died in the same place: never, or of

seldom ventured beyond that world. They seemed to settle for the

safety of their habitat, while for me they spent their lives in a cage”. Taking up this story after some time, with greater maturity and less anger, the filmmaker has finally managed to find the right key to tell the story of his “great race”. He has built an alter ego, represented by the innocent Hyacinth who has the face of Adrian Tardiolo (Happy Lazarus), and transformed him into the archetype of someone who stands in the middle between the desire to go and the fear of taking off. In addition to Tardiolo, the cast also includes John Calcagno in the role of Jack, Barbara Bobulova in that of the Director Malin e Nina Naboka (who plays Rocky). The film was in competition at the 40th edition of the Turin Film Festival and will soon be in cinemas, where it should land in the spring of 2023. The long run of this work, which began a few decades ago, is finally starting to cross the well-deserved finish line . Better late than never.