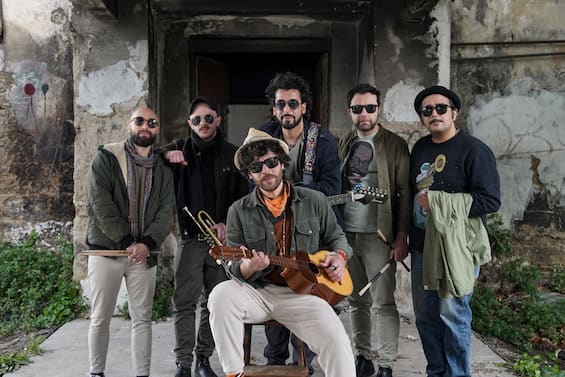 Under whom Tene Core, the new work of The mask, tells stories of resistance, of deep feelings, of normal people and their poetry. We think of the love between Mirella and Felice Pignataro, from which the Gridas, the carnival of Scampia, the counter-school are born; we think of the extraordinary life of Thomas Sankara, never quite remembered. To great loves and great second thoughts. To heroic gestures of simple men. To the invisibles of the whole world. Let’s think about who he sees in Under whom Tene Core a scream of resistance. I talked about it with Roberto Colellasoul of the band.

Roberto let’s start from the history of the album and from the realization that the word that most tells it is resistance: what does resisting mean today?

The focus on resistance is right, all the stories unfold from there. I hadn’t written love songs for a long time and I reflected that even in social songs there is a basis of love. It didn’t start out as a concept, I had seven songs and a saxophone riff. An introduction was needed and the song that gave the title to the album was born as a prologue and then it arrived Mirella is Happythe story of a love that from the walls of the house borders on the social context that surrounds it.
You are the song I never wrote: it seems to me a gesture of great intellectual modesty in the season of keyboard lions.

Everyone makes their own journey through songs. It contains the story of a boy who wanted to write songs but never did.
And speaking of happiness in Mirella is Happy talk about us children of a revolution: who are these us? And do you think Mirellas are more happy or unhappy today?

We play with words, there is a capital F. The story that interested us is that Felice and Mirella Pignataro moved to Scampia to do something about a devastated social situation, where 60 thousand people lived without services. It is a revolution of love! I don’t know which Mirelle prevails, I met the real one and she listened to the piece. She is an extraordinary person and aware of what she stands for.
Who is the hope of tomorrow?

A voice from above says it romantically to Mirella. They are the people who manage to have a slightly more marked culture. The cultural problem that Italy is experiencing is the lack of desire to investigate things. The hope is investments in culture and in bringing the school to the disadvantaged groups, where the school institution is not conceived and the state does not arrive.
Why did you recall the figure of Thomas Sankara, the president of Burkina Faso also known as the African Che Guevara? He said “we try not to become like this” … yet humanity is adrift.

He annoyed giants because we are slaves of capitalism. History has shown how it is possible to erase the memory of a man who has done great things while also renouncing humanitarian aid. Not everyone has enlightenment, he does.
What does the wooden heart represent?

An image that I have in mind and I cannot explain. The right way to describe the heart of a homeless man or of a homeless person, neither stone nor butter.
If I tell you “the controra” “black”, “gold”, “dark” … what will you answer me? Whoever loves has constancy: is it difficult today to have it in the time of social love? And is it difficult to write about love?

Very hard. I wrote it in a moment of deep sadness and I vented by writing. The question is: how do you make love resistant over time? I admire romantic loves full of tarantellas but which have a basic constancy, I think of my parents’ love, we grew up in public housing but we lacked nothing, today there are too many distractions and vanities, it is the period of maximum historical exposure and always aims to excel.
The theater of a thousand colors is a tribute to Napule is by Pino Daniele?

A quote, absolutely yes. But here the sentence breaks between life and love is not dedicated to Naples.
Tell me the story of August 14?
It is a hermetic song, an almost theatrical dialogue between two characters who are two parts of the same person, mind and heart or me and super ego; there is an afterthought and one decides that he must abide by the other’s rules. Rereading it seemed fitting with what happened with the Morandi bridge even if it was written before. The issue is rethinking.
Doing The Right Thing Is it hiding in thoughts?

No. It must be said that in love there is no right thing. It is always a subjective fact. There is a veil of irony.
Why in He sleeps cu mmè is there a part in Italian?

It was a coincidence. If I succeeded with the same authenticity, I would write in Italian. I couldn’t have said this ending any other way. Love is freedom is not translatable, there is no love in Neapolitan, we say I love you and the tone makes the difference.
Did it make you sad having to translate the lyrics? How much of pathos do you lose?

It inevitably loses a lot. If I think of Stromae it is a shame to translate him into Italian because he plays puns that get lost outside of French. But it is the only way to make everyone enjoy the image.
In the end, can we say that there are many who come forward, get their hands dirty and try to be happy?

It could be more. That would be the case. Today happiness is ephemeral because it does not last long and we are used to having everything at hand. And we don’t notice it. We sympathize with the rich and not the poor. It is the cross of our days, of those who make debts by car or telephone and to reach a status.
Tell me about the editorial project Naples 1943. Why did you choose that year? How did you think about the project?

During the Covid period I had a phase of hyper creativity. It is my story of the 4 Days of Naples by Nanni Loy. There is a character who invites courage using the words core and dies. It is published by the publishing house of Scampia Coppola Editore and has a very particular shape: it is a “literary postcard”, a volume that can actually be sent with a simple postage stamp, which you can read in 20 minutes. It’s a stamina pill.
What will happen in the coming weeks?

The summer tour went very well. In December the vinyl version will be released and soon we will announce the tour which will have a special final date in Naples.